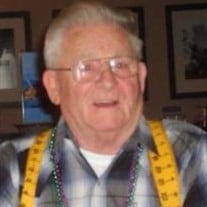 Albert F. ‘Pop’ Little Sr., 82, passed from this life on Monday, April 25, 2022. He was the loving husband of Mary (Archer) Little and they celebrated 64 years of marriage on March 27. Born in Stewartstown, he was the son of the late Charles and Florence (Bupp) Little. Albert was employed as a truck driver for Consolidated Freightways for 40 years. He enjoyed hunting, butchering, four-wheeling, snowmobiling, and spending time with the grandchildren. Surviving in addition to his wife are four children, Albert F. Little Jr. of Stewartstown, Sherri Little Harris and her husband, Rob of New Freedom, Keith A. Little and his wife, Lisa of Felton, and Machelle Wagner and her husband, Todd of Stewartstown; 6 grandchildren, Duke, Dillon, Katie, Sierra, Savannah, and Shyanne; 5 great grandchildren; and three siblings, Richard Little and his wife, Kay of Stewartstown, Renee Anderson of Stewartstown, and Ellen Adams of Hellam. Pop was preceded in death by siblings, Wilson, Jim, and Charles Little, Ruth Blouse, and Hazel Aubel. Relatives and friends are respectfully invited to attend a public viewing from 5-7 p.m. Thursday, April 28, at Hartenstein Funeral & Cremation Care, Inc., 19 S. Main St., Stewartstown. There will be a funeral service at 2 p.m. on Friday, April 29 at the funeral home immediately followed by interment in the Stewartstown Cemetery. Memorial Contributions in Pop’s honor can be made to Immanuel Baptist Church, 21133 Barrens Rd. S., Stewartstown, PA 17363. HartensteinCares.com

Send flowers to the Little family.