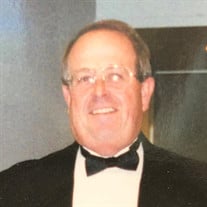 Allie Lee Waldron, 78, passed away Monday, January 18, 2021. He was the husband of Barbara F. Waldron for 56 years. Born in Roanoke, VA, he was a son of the late Earl Gilmore and Edna (Weber) Waldron. Allie graduated from Virginia Tech, where he was a member of the Corps of Cadets, in 1964. After receiving his Bachelor’s degree, he served in United States Air Force from 1964-1976. While in the Air Force, he earned his Master’s degree from Central Michigan University in 1974. Following separation from the Air Force, he continued his service in the Maryland National Guard and retired as a Lieutenant Colonel after 25 years of dedication. Allie worked for AAI Corporation as Director of International Programs, retiring in 2006 after 27 years of service. He was a director on the Southern York County School Board from 2007 to 2019 and served on the board of the Southern York County YMCA for 4 years. Allie was an active member of the Bon Air Country Club and Southern York County Rotary Club. In his free time, he enjoyed golf, woodworking and reading. In addition to his wife Barbara, he is survived by his two children, a son David L. Waldron and his wife Sherri of Marriottsville, MD and a daughter Deanna L. Waldron of Richmond, VA; a grandson Benjamin F. Waldron of Marriottsville, MD; and a brother Leonard O. Waldron of Demorest, GA. He is preceded in death by two brothers Edward and Alton Waldron, formerly of Roanoke, VA. A Memorial service will be at a later date at the convenience of the family. Hartenstein Funeral & Cremation Care, Inc., New Freedom is assisting the family during this time. Memorial contributions may be made to the Paul Smith Library of Southern York County, 80 Constitution Ave., Shrewsbury, PA 17361. www.HartensteinCares.com

Allie Lee Waldron, 78, passed away Monday, January 18, 2021. He was the husband of Barbara F. Waldron for 56 years. Born in Roanoke, VA, he was a son of the late Earl Gilmore and Edna (Weber) Waldron. Allie graduated from Virginia Tech,... View Obituary & Service Information

The family of Allie Lee Waldron created this Life Tributes page to make it easy to share your memories.

Send flowers to the Waldron family.