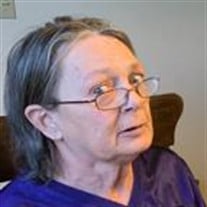 Alverta Rae ‘Birdie’ Striebig, 66, passed away Wednesday, June 17, 2020. Born in Shrewsbury, she was the daughter of the late Kenneth ‘Paul’ and Aroma Marlene (Ehrhart) Hess. She had worked at the sewing mill in Seven Valleys for years and was an officer in the union. She later worked at the Farmer’s Daughter Gift & Garden Center in Shrewsbury. She loved gardening, houseplants, NASCAR, fishing, her pets, and was an avid Ravens fan. She had been a Sunday School teacher at one point at Christ Lutheran Church, Shrewsbury, and enjoyed blue grass and country music. Surviving is her daughter, Lisa M. Chavez of Mechanicsburg; 2 grandsons, Chase Attig-Chavez of Mechanicsburg and Cameron Attig-Chavez of New Freedom; 4 brothers, Donald Hess of Mechanicsburg, Jerry Hess of Shrewsbury, Clarence ‘Sam’ Hess and his wife, Jean of Alaska, Ricky Hess and his wife, Caroline of Red Lion; 3 sisters, Barbara Kowatch of Riverside, CA, Linda Mullen and her husband, Ben of NC, and Marlene Loser and her husband, Doc of Harrisburg; and a special friend, Kevin Shaub of New Freedom. She was preceded in death by a beloved daughter, Jennifer L. Striebig; 4 brothers, James L., Paul E. ‘Sonny’, Paul D. ‘Danny’, and Dale L. Hess. There will be a viewing from 12 – 2 p.m. Tuesday, June 23, at Hartenstein Funeral & Cremation Care, Inc., 24 N. Second St., New Freedom, with a funeral service starting at 2 p.m. Guests are asked to wear masks to keep everyone safe. Interment is private and at the convenience of her family. If desired, memorial contributions may be made in Birdie’s memory to: National Coalition Against Domestic Violence (www.ncadv.org) 600 Grant, Suite 750, Denver, CO 80203. HartensteinCares.com

The family of Alverta Rae 'Birdie' Striebig created this Life Tributes page to make it easy to share your memories.

Send flowers to the Striebig family.