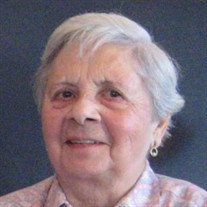 Arlene Shue Fritz Williams, age 95, died on April 9, 2020, while residing at the Phoebe Wyncote Nursing Home, Wyncote, PA. Hospice care was started in late December of 2019 to provide comfort for late-stage symptoms of dementia, which she battled for some 15 years…first at home, then at Sunrise of Abington, and lastly at Phoebe Wyncote. The family is grateful for her many wonderful caregivers. Arlene was a loving and devoted wife, mother, grandmother, and great-grandmother. She is survived by her son, Judson Williams, of Selinsgrove, PA, and his wife, Connie; by her daughter, Julie Williams Anderson, of Willow Grove, PA, and her husband David; by her six grandchildren, Jeff Brehony (WA), Jared Williams (UK), Trevor Williams (VT), Jordan Brehony (NM), Darby Williams Marcus (MD), and Holly Anderson (PA); by her six great-grandchildren, Lily, Jameson, Esther, Parker, Hudson, and Alexander; and by her cherished niece, Monica Jones Rowan and family. Arlene was preceded in death by her parents, her sister, Miriam Fritz Jones Henderson, and by her beloved husband, Ralph Norman Williams, Jr (1924 - 2006) who was her high school sweetheart. Arlene was born on October 11, 1924 in Shrewsbury, PA, to Elvin Guy Fritz and Lovie Shue Fritz. She grew up on her parents’ farm, walked to school at the local one room schoolhouse, and graduated from New Freedom HS in 1942. Arlene was an outstanding student and was selected as one of her class’s valedictorians where she spoke about the youth of the future. She acted in several of her high school’s plays and ran on the cross-country team. During WWII she worked for the telephone company in Baltimore, MD. Arlene and Ralph eloped and were married there on June 26, 1945, while he was on a three-day pass from the Navy. After the war they moved to a small apartment in Philadelphia, PA, where Arlene did payroll work while Ralph attended Drexel University. In 1953 they bought their forever home in Flourtown, PA. Arlene was a well-regarded secretary at the Enfield Jr High/Middle School in Springfield Township from 1964 to 1992, where she was known for her warm smile and friendly nature. She loved spending time with her family, and treated her loved ones to summer vacations in Wildwood Crest and Ocean City, NJ. She enjoyed watching football, baseball, and basketball, taking day-trips with Ralph, exploring covered bridges, walking along the Wissahickon, strolling through Longwood Gardens, reading, relaxing on her patio, listening to jazz and classical music, visiting friends and relatives, and caring for her miniature poodles…there were four over the years…Mike, Tugger, JJ, and TJ. Graveside services were held Friday, June 26, 2020 in the New Freedom Cemetery.

The family of Arlene Shue Fritz Williams created this Life Tributes page to make it easy to share your memories.

Send flowers to the Williams family.