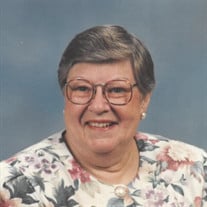 Betty June Nonemaker, 87, passed away early Tuesday, January 19, 2021, at Country Meadows Retirement Community (Leader Heights) after complications from COVID-19 and Alzheimer's dementia. Born in Parkton, Maryland, she was the daughter of the late Norman P. and Margaret D. (Miller) Rosier, and devoted wife of the late Harry L. ("Snag") Nonemaker who died in 1995. Betty graduated from New Freedom High School and Thompson Business School in York. She was an executive secretary at the American Insulator in New Freedom prior to the birth of her first child, and a full-time homemaker while her children were young. Many local adults fondly remember her as a cook in the New Freedom Elementary and Southern York County Elementary School cafeterias, where she started working after her youngest child began school and continued until he graduated. This part-time schedule allowed her to focus on her family and always be home with her children. Thereafter, Betty worked full-time as a document handler for engineering staff at AAI (Cockeysville) prior to her retirement in 1995. Betty was a life-long resident of New Freedom prior to moving to Country Meadows 6 years ago. A talented pianist, she played the piano for her Sunday School class and church choir, and was part of a Southern York County jazz band in the early 1950s. She was an active volunteer in her community, often using her talent in the kitchen for local fund-raising, such as church soup sales and making funnel cakes at the annual New Freedom Lions carnival. Betty was a life-long member of St. John's Evangelical Lutheran Church in New Freedom, where she was active for many years in the Lutheran Church Women (LCW) group. She was a charter member and past-president of the New Freedom Jaycettes, and a member of the VFW Auxiliary Post 7012, New Freedom Lioness Club, and Southern York County Senior Center, where she enjoyed participating in outings, ceramic classes, and helping to serve lunch every day. Betty traveled extensively after her retirement, visiting all 50 States and several Canadian provinces. She also loved going to craft shows and farmer's markets. Sharing interests and traveling with her daughter, they were usually always together. Betty was a life-long gardener, always working in her flower beds until hindered by knee problems. She also enjoyed making crafts and decorating her home; and most especially during her later years, reading or doing puzzle books on her front porch, where friends and neighbors often came to visit. Betty was reluctant to leave New Freedom and her home of 50 years but thrived when she moved to Country Meadows in early 2015. She fully participated in on-site activities and outings, and rekindled her artistic talent by participating in painting classes and craft-making events. Betty's winning personality and warm manner, eagerness to participate in activities, and most especially her ready laugh and sense of humor quickly made her a favorite among many of Country Meadow's caring staff. Surviving Betty is her daughter, Sue Ellen Nonemaker of York; two sons, Lawrence P. Nonemaker (and partner Doris Holbert) of Mt. Wolf, and Todd A. Nonemaker of Stewartstown; and two granddaughters, Stephany D. and Laura M. Nonemaker. She was preceded in death by her sister Thelma May Winemiller; mother-in-law Edna M. Nonemaker, who lived with the family and Betty cared for during the last 12 years of her life; and beloved grand-dog Ernie. A grave-site service was officiated by Pastor George Schneider at New Freedom cemetery on January 22. If desired, Betty wished memorial contributions be made to St. John Evangelical Lutheran Church, PO Box 25, New Freedom, PA 17349.

Betty June Nonemaker, 87, passed away early Tuesday, January 19, 2021, at Country Meadows Retirement Community (Leader Heights) after complications from COVID-19 and Alzheimer's dementia. Born in Parkton, Maryland, she was the daughter of the... View Obituary & Service Information

The family of Betty June Nonemaker created this Life Tributes page to make it easy to share your memories.

Send flowers to the Nonemaker family.