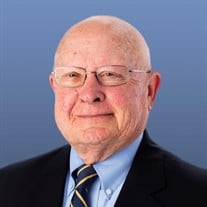 D. Reed Anderson, 78, entered into Heaven on March 30, 2021. He was born in York on July 9, 1942 to John Hope Anderson, Sr and Lelia Reed Anderson. Reed was the husband of Connie (Quesenberry) Anderson of New Park, with whom he shared 56 years of marriage, and the loving father of Jamie Hope Anderson, of Kitty Hawk, NC and Jody Anderson Leighty, wife of Richard L. Leighty, Jr of Stewartstown. He was also the loving grandfather of Charlie and Sarah Shotton, and Tess and Hank Leighty. He is survived by a brother, John Hope Anderson, Jr and wife Barbara, and a sister, Mary Linkous, and husband Mike. Reed graduated from Kennard-Dale High School, Penn State University and the Dickinson School of Law. Upon graduation from law school, he entered the U.S. Army, serving two years, one of which was in Vietnam. Upon his return from Vietnam, he joined the law firm of Stock and Leader in York, Pa. For the next 51 years, he practiced law and helped countless people, particularly in southeastern York County. He never met a stranger and cared deeply for others and his community. His was a life of service to others, serving on many non-profit boards and committees. Reed was a founder, President and board member of the Northern Central Railway, formerly Steam into History, President of Mason-Dixon Library, Co-Chair of YorkCounts, board member and Chair of Wellspan Health Board of Directors, Chair of York County Chamber Of Commerce, and Campaign Chair for United Way, receiving the Distinguished Achievement Award. He was also a board member of York County Community Foundation, Penn-Mar Human Services, American Red Cross-York Chapter, the Penn State-York Advisory Board, and Spirit Trust Lutheran, receiving the 2019 Cornerstone Award. Reed served as a director on the Board, Vice Chairman and Lead Director of Codorus Valley Bancorp, Inc and PeoplesBank from 1994 to 2017. A lifelong member of Centre Presbyterian Church, Reed served as an elder (many times), and a Sunday school teacher. He was also a member and past Master of the Friendship Masonic Lodge in Fawn Grove, Pa. Reed was an avid reader and enjoyed porch sitting, relaxing in Kitty Hawk, NC, traveling with Connie, spending time with his family, doting on his grandchildren and the occasional round of golf at Bon Air CC. He also loved dirt track racing, NASCAR and involvement with the Eastern Museum of Motor Racing. Reed’s lifelong love of trains inspired him to found the Northern Central Railway, formerly Steam into History, with his good friend, William Simpson. A Celebration of Reed’s Life will be held Saturday, August 7, 2021 at 2pm at Kennard-Dale High School Auditorium, 393 Main St., Fawn Grove, PA with Rev. Donald Hackett officiating. Private interment will be held at Centre Presbyterian Cemetery. Visitations will be held Friday evening from 6-8pm at Centre Presbyterian Church, 83 New Park Rd., New Park, PA and on Saturday at the High School from 12pm until the time of the service. In lieu of flowers, memorial contributions may be made to Northern Central Railway, formerly Steam into History, P.O. Box 128, New Freedom, PA 17349 or online at www.northerncentralrailway.com. or to Centre Presbyterian Church Memorial Fund, 83 New Park Rd., New Park, Pa 17352.

D. Reed Anderson, 78, entered into Heaven on March 30, 2021. He was born in York on July 9, 1942 to John Hope Anderson, Sr and Lelia Reed Anderson. Reed was the husband of Connie (Quesenberry) Anderson of New Park, with whom he shared 56... View Obituary & Service Information

The family of David Reed Anderson created this Life Tributes page to make it easy to share your memories.

Send flowers to the Anderson family.