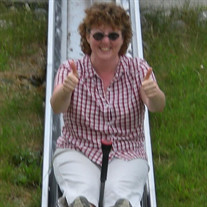 After a year-long battle with an aggressive cancer, it is with great sadness and heartbreak we announce the untimely loss of Darlene Mae McGuigan of Nottingham, Maryland. Born September 9th, 1961, Darlene was originally from New Freedom, Pennsylvania. She is survived by both her parents, William and Virginia McGuigan of New Freedom; her elder sisters, Deborah Page and her husband David of Stewartstown, Pennsylvania, Denise Bennett and her husband Robert of Catawba, Virginia, and her younger brother, David McGuigan and his wife Julia of Newport, Pennsylvania, along with a niece, four nephews and two grand nieces. A 1979 graduate of Susquehannock High School, Darlene held an eclectic working career first in food services with various local restaurants, and then at the Lutheran Home of Shrewsbury, Pennsylvania. She was then employed as a skilled production worker at the Aircraft Armaments Incorporated assembling aircraft intercept missiles. After a short tenure with All National Weather Incorporated building portable weather stations, she completed her Bachelor’s Degree in Business Administration through Notre Dame University. Darlene then held a distinguished working career with Lockheed Martin as an Engineering Configuration Manager, supporting the United States Navy shipboard Vertical Launch Missile system leaving a lasting legacy to her fellow coworkers. From a very early age Darlene was the family’s intrepid traveler. At age 8 she ran away from home on her hand-me-down bicycle only to return home minutes later after her big toe was caught in the chain sprocket. This early episode sparked a life-long interest in traveling the world, visiting England, Germany, Switzerland, Austria, Lichtenstein, France, Luxembourg, Turkey, Greece, Croatia, Italy, Dominican Republic, and Canada along with a multitude of destinations in the United States; however, her most favorite destination will always be Topsail Island in North Carolina. Always sharp witted and quick with a snappy reply, Darlene was the spark at any family or work place gathering. Her sense of humor kept us all laughing in stitches and grounded in reality. She was a relentless family board game player, most notably Dominoes, Scrabble, and Sequence and would organize scavenger hunts for her friends and co-workers. Darlene was always the organizing force in our family, arranging and coordinating holiday gatherings only to beat us all the aforementioned board games. Darlene also got great pleasure in needlepoint and in her final year, by playing Hayday online with fellow farmers across the United States. Cremation will be at Hartenstein Funeral & Cremation Care, Inc. in Stewartstown, Pennsylvania, followed by a grave side service to be held on November 9th at Bryansville United Methodist Church in Delta, PA, at 12:30pm. In lieu of flowers, please make any donations to the American Cancer Society or the Stella Maris Hospice of Lutherville, Maryland.

After a year-long battle with an aggressive cancer, it is with great sadness and heartbreak we announce the untimely loss of Darlene Mae McGuigan of Nottingham, Maryland. Born September 9th, 1961, Darlene was originally from New Freedom, Pennsylvania.... View Obituary & Service Information

The family of Darlene Mae McGuigan created this Life Tributes page to make it easy to share your memories.

After a year-long battle with an aggressive cancer, it is with...

Send flowers to the McGuigan family.