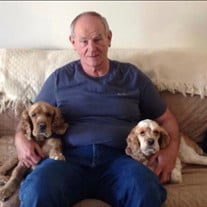 Dennis G. Deems, 69, of New Freedom passed away after a long battle with blood cancer and Leukemia surrounded by his family and close friends. He was the loving husband of Coleen M. (Connolly) Deems for 46 years. Dennis was born to Joseph and Frances (Wehn) Deems in Baltimore, MD as one of six children. After high school, Dennis joined the United States Army where he proudly served his country for 20 years, including time spent in Vietnam. During his time in the military Dennis gained his skill of neat yardwork, winning Lawn of the Month numerous times while staying on base, which continued into his civilian life. When he wasn’t working on his yard, Dennis could often be found spending time with his dogs and his family. They regularly attended Baltimore Orioles and Ravens Games, including an attendance to Super Bowl 47 against the San Francisco 49ers. He also enjoyed many trips to the beach and to Disney World with his family. Dennis cherished his friends, often meeting for breakfast or lunch to catch up with those around him. And if you were not a friend of Dennis’, you would be soon. He often made fast friendships that lasted. He will be greatly missed by many, In addition to his wife Coleen, Dennis is survived by his daughters Stephanie Kilgore and her husband William, and Robin Andrés and her husband Bruce; 3 grandchildren Garrett, Bridget, and Mitchell Kilgore, siblings Joseph Deems, Evelyn Ditzler, and Carrie Johnson; and numerous nieces, nephews, and friends. Dennis is preceded in death by his parents, and two brothers Robert and Hank Deems. A public graveside service with full military honors will take place on Saturday February 22, 2020 at Stewartstown Cemetery starting at 11 AM. Rev. Benjamin Dunkelberger will be officiating the service, with the York County Veteran's Honor Guard presenting military rites. Kindly omit flowers at this time and consider donating to the Defenders of Animal Rights Shelter, a no-kill animal shelter near and dear to Dennis’ heart. Those memorial contributions may be sent to 14412 Old York Road, P.O. Box 25, Phoenix, MD 21131. Hartenstein Funeral & Cremation Care, Inc. in New Freedom is assisting the family with their wishes.

Dennis G. Deems, 69, of New Freedom passed away after a long battle with blood cancer and Leukemia surrounded by his family and close friends. He was the loving husband of Coleen M. (Connolly) Deems for 46 years. Dennis was born to Joseph and... View Obituary & Service Information

The family of Dennis G. Deems created this Life Tributes page to make it easy to share your memories.

Send flowers to the Deems family.