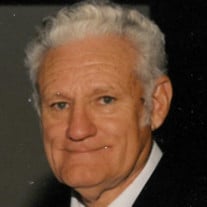 Edwin F. “Sunny” Spicer, 85, passed away Tuesday, June 23, 2020 at home surrounded by his family. Born in York, he was the son of the late Edwin J. and Rhoda B. (Adams) Spicer. He was the husband of Barbara J. (Wentz) Spicer of Glen Rock, sharing 19 years of marriage together. He was a veteran of the United States Army serving during the Korean War. He was a member of the Far Eastern Command Honor Guard. Sunny loved God. He was a member of New Freedom Baptist Church and a former Deacon. Sunny retired in 1999 from York International, now Johnson Controls, after 33 years of service. He also had been employed as a mail carrier for several years in the Shrewsbury area. Sunny was an avid hunter and fisherman. He was a member of Kettle Creek -Tamarack Sportsmens Association Clinton County. Sunny loved his family, taking rides to look for deer and turkey, ice cream and McDonald’s. In addition to his wife Barbara, he is survived by a son Edwin D. Spicer of New Freedom; three daughters Susan Keeny and her husband Kenneth of Stewartstown, Dawn Johnson of Delmar, Delaware and Ellen Rohlf of Glenville; 10 grandchildren; 20 great grandchildren. He was preceded in death by his first wife Dorothy J. (VanMeter) Spicer in 1999, a brother Robert A. Spicer, great grandson Bronson Keeny and son in law Robert Johnson. The family would like to give a special thank you to Hospice & Community Care for all their care. Viewings will be on Sunday, June 28, 2020 from 4:00-6:00pm and Monday, June 29, 2020 from 9:00-10:00am at Hartenstein Funeral & Cremation Care, Inc., 24 N. Second St., New Freedom, PA. A Service will begin at 10:00am on Monday at the funeral home with Rev. Michael Hopkins officiating. Burial will be in Susquehanna Memorial Gardens with Military Rites provided by York County Veterans Honor Guard. If desired, memorial contributions may be made in in Edwin’s memory to New Freedom Baptist Church; 851 Campbell Rd., New Freedom, PA 17349.

The family of Edwin F. Spicer created this Life Tributes page to make it easy to share your memories.

Send flowers to the Spicer family.