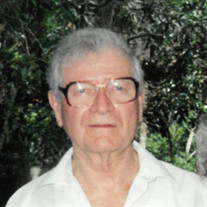 Edwin L. Stackpole, Jr., 93, passed away Tuesday, June 23, 2020. He was the devoted husband of the late Fay A. (Bickel) Stackpole who passed away in June of 2017. Born in Reading, Edwin was the son of the late Edwin L. Stackpole, Sr. and the late Martha M. (Wadsworth) Stackpole. After proudly serving in the US Navy during WWII, Ed worked as a machinist in the steel industry. He was musically inclined, playing the violin, mandolin, guitar, banjo and harmonica. He had an ear for music and enjoyed playing with many country/western bands. He was a loving husband and father. He was an avid reader with many diversified interests. Surviving are two daughters, Wanda L. Kunkoski of Windsor and Linda Snyder, and her husband Robert of Felton; 4 grandchildren; 9 great grandchildren; a sister-in-law, Marlene Stackpole; and two nieces. He was preceded in death by a daughter, Barbara A. Gillum, a brother, Courtland I. Stackpole, and a son-in-law, Edward L. Gillum. There will be a viewing from 10-11 a.m. Tuesday, June 30, at Hartenstein Funeral & Cremation Care, Inc., 19 S. Main St., Stewartstown, with a service beginning at 11 a.m. He will be laid to rest next to his beloved Fay in Round Hill Cemetery, Felton, with military honors.

The family of Edwin L. Stackpole Jr. created this Life Tributes page to make it easy to share your memories.

Send flowers to the Stackpole family.