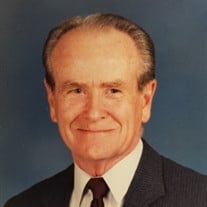 Edwin C. Wineholt, 94, of SpiriTrust Lutheran Village, Shrewsbury, Pennsylvania died on December 8, 2020. He was the husband of Helen E. (Gemmill) Wineholt, to whom he was married for over 73 years. Edwin was born just south of the town of Maryland Line, Maryland on January 11, 1926 to Ira L. and Virginia (Cochran) Wineholt. He enlisted in the Navy at age 17, serving as a gunner’s mate on LCT 1054, and was a veteran of the Battle of Okinawa during World War II. After being discharged from the Navy in April of 1946, he soon thereafter started employment at F.X. Hooper, later Koppers Company, in Glen Arm, MD, where he worked as a skilled operator of lathes, milling machines and other devices to make parts for corrugated box-making machinery. He retired from Koppers Company in 1990. Edwin was a member of the Maryland Line United Methodist Church since 1942, and was active in church and community affairs. He served as Church Treasurer and Treasurer of the Improvement Fund during the construction of the Educational Building. He was a good athlete and enjoyed softball, golf and tennis. He is survived by his beloved wife Helen, sons Dale and partner Ruth, of Chantilly, VA and Ronald and wife Cookie of Arnold, MD; granddaughters Adrienne, Lauren and Wendy; great grandchildren Mikaela, McKinsey, David, Jeremy and James; and brother Phillip. He was preceded in death by his parents and sister Elizabeth Grant and brother Allan. A Graveside Service will be at the New Freedom Cemetery, PA at 10:00 a.m. on Friday, December 11, 2020. Condolences may be made online at www.hartensteincares.com . In lieu of flowers, those desiring may send memorials to the Maryland Line United Methodist Church at 21500 York Road, Freeland MD 21053.

Edwin C. Wineholt, 94, of SpiriTrust Lutheran Village, Shrewsbury, Pennsylvania died on December 8, 2020. He was the husband of Helen E. (Gemmill) Wineholt, to whom he was married for over 73 years. Edwin was born just south of the town... View Obituary & Service Information

The family of Edwin C. Wineholt created this Life Tributes page to make it easy to share your memories.

Send flowers to the Wineholt family.