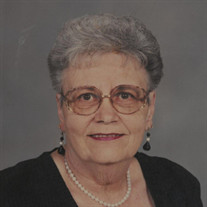 Edwina Hope Bilger, 86, passed away Wednesday, June 24, 2020. She was the loving of wife of Richard G. Bilger Sr. and they celebrated 69 years of marriage in 2019. Born in Altoona, she was the daughter of the late Edward W. and Carmine (Crum)... View Obituary & Service Information

The family of Edwina Hope Bilger created this Life Tributes page to make it easy to share your memories.

Send flowers to the Bilger family.