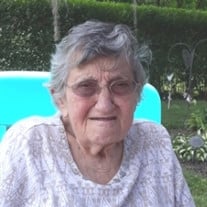 Esther K. Brent, 92, of Freeland, MD passed away at UPMC Pinnacle Memorial Hospital in York, PA on September 30, 2019. She was the loving wife of the late Charles H. Brent, Sr. Esther was born in Lancaster, PA to Alfred and Margaret (Hershey) King and grew up in New Freedom. A wonderful mother, she was kind and giving and the best friend anyone could have. As a friend, she would be there no matter the time or day. Whatever she was doing, she would stop; nothing was too much trouble and there wasn’t anything she wouldn’t do to help someone. Esther gave all she had and more. Esther taught Sunday School and was a Bible School Director for years. Her hands were always busy crafting, knitting or crocheting. Esther traveled extensively on mission trips, volunteering wherever needed. When someone needed a place to stay, her door was always open, and her table had room for one more. Esther retired from CMP Telephone Company and worked a variety of jobs while raising her family tirelessly. Esther made every day a holiday for everyone she met. As a mother and grandmother, Esther was a prayer warrior, unpaid Uber driver, doctor, and educator. She was a caring mother, grandmother, great and great-great grandmother and was loved beyond measure. She will be truly missed and fondly remembered. Esther is survived by her 8 children Carol Robinson and her husband Daniel, Lawrence Entler and his wife Lucy, Peggy Markel and her husband Gordon, Donna Barton, Alan Brent, Charles Brent, Jr. and his wife Kathleen, Patricia Garvin, Sharon Barton and her husband Richard; 3 step children Lee Brent and his wife Charlotte, Viola Clum and her husband Robert, and Norman Brent and his wife Joan; a son-in-law Richard Sipe; numerous grandchildren and great-grandchildren; 2 great-great grandchildren; and a brother Lawrence King and his wife Barbara. Esther is preceded in death by her parents, her husband Charles H. Brent, Sr., a daughter Paula A. Sipe, and a sister Irene King. A viewing will be held at Hartenstein Funeral & Cremation Care, Inc. 24 N. Second St., New Freedom, PA 17349 on Friday October 4, 2019 from 7-9 PM. A funeral service will begin at 11 AM on Saturday October 5, 2019 at Mt. Zion United Methodist Church, 20901 Mt. Zion Road, Freeland, MD 21053 with Rev. Dennis Schulze officiating. Interment will follow in the church cemetery. In lieu of flowers, please consider donating to the church at the above mentioned address in Esther’s name.

Esther K. Brent, 92, of Freeland, MD passed away at UPMC Pinnacle Memorial Hospital in York, PA on September 30, 2019. She was the loving wife of the late Charles H. Brent, Sr. Esther was born in Lancaster, PA to Alfred and Margaret (Hershey)... View Obituary & Service Information

The family of Esther K. Brent created this Life Tributes page to make it easy to share your memories.

Send flowers to the Brent family.