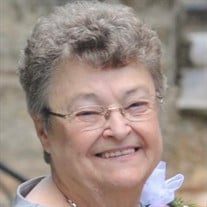 Harriet Emma (Mellott) Harman entered into Heaven on Saturday, October 30, 2021. Harriet was born on January 2, 1930 to Harvey “Pat” Mellott and Miriam C. (Linebaugh) Mellott. Harriet was the wife of Edward J. Harman, Jr. (deceased) with whom she shared 41 years of marriage. She was the loving mother of Cathi Ennis, wife of John Ennis (deceased) and Peggy Kingman (deceased) wife of Jim Kingman. Harriet was also the loving grandmother of Jim Ennis and Nikki Griggs, wife of Alex Griggs, and Jen Brown, wife of Dave Brown, and Allie Ryckaczewski, wife of Rick Ryckaczewski. She was also the loving great-grandmother of Talen and Kincaid, Ollie and Sonny, Logan and Carter, and Reagan and Charlie. She is survived by a niece, Brenda Musser and husband Bruce Musser, and a nephew, Larry Kohr. Harriet graduated from York High, Class of 1949. She spent the early years of her marriage raising her daughters. She worked part-time at City Edge Restaurant and retired as a proofreader and Supervisor of her department at Progressive Typographers in York. Her’s was a life of service to others. Serving on many committees she volunteered at Springettsbury Fire Dept. women’s auxiliary and as a girl scout leader. She was an officer of the East York Gallopers. She volunteered in Southern York County and Red Lion Area school districts as a classroom helper. Harriet led a weekly hymn sing at Victorian Village senior community in Dallastown. Singing was an integral part of her life. She played the piano and organ. Harriet began singing at church at a young age. She sang on the local radio station. From the 50’s throughout the rest of her life she was a soloist at weddings and other events. She was a lifelong choir member singing with choirs at Yorkshire, Trinity, Grace and Longstown United Methodist churches. In the 1950’s she organized a children’s choir of over 50 children. In her retirement years she was director of a singing group called the “Harmanairs”. This was a group of men and women from the Longstown Village Community. They used their talents to sing in their community, at nursing homes, senior centers, churches, AARP’s and presented benefit concerts. Next to her family, the Harmanairs were the love of her life. The most important thing in Harriet’s life was her family. She loved spending time with her daughters, grandchildren and great grandchildren. Family vacations were spent together at Rehoboth Beach and Disney World where lasting memories were made. A Memorial Visitation will be held at Longstown United Methodist Church, 2975 Carol Rd., York, PA, on Friday, November 5, 2021 from 11:00 am to 12:00 am. A Funeral service will begin at 12:00 and officiated by Pastor Laura Holtzapple followed by burial in Mt. Rose Cemetery. Services are entrusted to Hartenstein Funeral & Cremation Care, Inc., 24 N. Second St., New Freedom, PA 17349. In lieu of flowers, memorial contributions may be made to Peggy Kingman Memorial Welfare Fund, SYCSD Foundation, P. O. Box 128, Glen Rock, PA 17327 or Senior Commons Powder Mill, 1775 Powder Mill Road, York, PA 17403.

The family of Harriet Emma (Mellott) Harman created this Life Tributes page to make it easy to share your memories.

Send flowers to the Harman family.