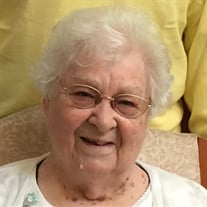 Helen Margaret (Neuhaus) Hoffman, beloved child of God, died on Saturday, 21 August 2021 at Zimmerman Place in Shrewsbury where she had made her home for the past 12 years. She was 102. Over the course of her life, she was a cherished wife, mother, grandmother, great-grandmother, sister, aunt, friend, church member, and community volunteer. Helen’s vocations included her shared life with Harry running a farm near Glen Rock; working at Pfaltzgraff Pottery; the York Hospital; and Barbara J. Egan Nursing Home in Shrewsbury as the cook at its opening. But the center of Helen’s life were her family, her faith, and her volunteer community service. Helen was married to the late Harry E. Hoffman on 23 June 1945 at the end of WW II, when Harry returned from his service in the US Army and captivity as a German prisoner of war. Into their marriage were born three sons: John, who died at birth, James, and Paul. Jim and his wife, Kay, of York and Paul and his wife, Donna, of Seattle survive her. She is also survived by grandchildren Kara (Chris) Koller of York; Jacob (Laurie Kearney) Hoffman, and Lauren Hoffman all of Seattle; by great grandchildren Leah and Elliott Koller; a nephew Harry (Bonnie) Wolf; a “Danish son,” Eigil (Ulla) Larsen. In addition to Harry and John, Helen was preceded in death by her parents, Clarence and Margaret Neuhaus and her sisters and brothers-in-law, Hazel and Paul Hostetter and Thelma and Ervin Wolf. She was a life-long member at Christ Lutheran Church in Shrewsbury. There she was baptized, confirmed, and married. She served as a Sunday School teacher, a member of the call committee, a member of the senior choir, and an officer in both the Ladies’ Aid and Missionary Society. For years she volunteered keeping church records and recruiting weekly lectors. She volunteered at the nursing home on the SpiriTrust campus for years and, as chair of its auxiliary, coordinated the annual Fall Village Fair. She was a member of the Friendship Elementary School PTA, Susquehannock High School Band Boosters, PTA, and American Field Service, and the Ladies Auxiliary of Austin L Grove Post #403 of the American Legion. She was a cub scout den mother, a representative to the Auxiliary of Gettysburg Seminary, and a member of New Freedom’s Happy Seniors. She was a charter member of Triangle Chapter, #483 of the Order of Eastern Star and served as its worthy matron in 1970’s. Due to the Covid pandemic, a private graveside service will be held at the family plot in the cemetery at Christ Lutheran Church in Shrewsbury. At a later date, a public online service will be held to which all are invited. Should you choose to remember Helen with a memorial, the family suggests a contribution to your favorite charity, or Homeland at Home Hospice, 2300 Vartan Way, Suite 270, Harrisburg, PA. 17110. We are grateful to every single person who offered Helen friendship, love, and care across the span of her long life, including those faithful servants at Zimmerman Place in Shrewsbury, Wellspan Hospital in York, and Homeland Hospice Care. Helen’s baptism is now completed in her death. She lived her life and met her death in this promise from Romans 8:38-39, “I am convinced that neither death, nor life, nor angels, nor rulers, nor things present, nor things to come, nor powers, nor height, nor depth, nor anything else in all creation, will be able to separate us from the love of God in Christ Jesus our Lord.” May she rest in peace and rise with all the saints in glory.

Helen Margaret (Neuhaus) Hoffman, beloved child of God, died on Saturday, 21 August 2021 at Zimmerman Place in Shrewsbury where she had made her home for the past 12 years. She was 102. Over the course of her life, she was a cherished wife,... View Obituary & Service Information

The family of Helen Margaret (Neuhaus) Hoffman created this Life Tributes page to make it easy to share your memories.

Send flowers to the Hoffman family.