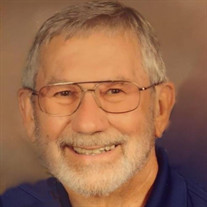 Henry Marion Sommer, 79, of New Park, PA went home to the Lord on Tuesday, February 23, 2021. He was the husband of Glenda J. (McCleary) Sommer to whom he was married for 57 years. Henry was born on June 9, 1941 in Joppa MD and is the son of the late Frank and Eleanor Sommer. Henry and his family moved to Delta in 1953, where the family started the Delta Star newspaper. He was a graduate of Kennard Dale High School in 1959, where he served as Class Treasurer. After graduation, he enlisted in the United States Navy where he was involved in the Bay of Pigs Invasion. Henry worked on computer systems for Exelon, Honeywell, and Shingle and Gibb. Henry was very active throughout the community, involved in various organizations including Fawn Rec Council, Fawn Township Supervisors, Fawn Township Auditor, American Legion, VFW, Masonic Lodge, Scottish Rite, PTO President, Mason Dixon Library Committee, and Little League Coach. He and Glenda traveled often including trips to Australia, Japan, Russia, Africa, and Spain and around the United States. They also frequently visited Ocean City MD for the last 50 years. He also enjoyed camping, sporting events, car races and reading. Henry loved the Lord and was a member of Prospect United Methodist Church in New Park PA for 56 years. He served as Treasurer, Lay Leader, Financial Secretary, Administrative Board Chair, Church Choir, and Sunday School teacher for over 30 years. Henry always took pride in his family as well as spending time at the farm, Sommer Springs Farm. If he wasn't on the computer or reading novels, you could find him supervising farm projects. In addition to his wife Glenda, he leaves behind his son, Todd H. and wife Debra (Webb) of New Park PA; son, Scott M. of Brookline NH; grandchildren, Lindsey, Jordan, Zachary and John, of which he played a very active part throughout their lives. Henry is also survived by his brother, Gilbert and wife Ann, brother Charles and wife Margaret, and sister, Carol Mullins, all from Delta PA as well as numerous nieces and nephews. He was preceded in death by his brothers Frank and John. Graveside services will be held Monday, March 1, 2021 at 11AM from Prospect United Methodist Cemetery, 8 Orchard Rd. New Park (Gatchellville). Military honors will be rendered by the York County Veterans Honor Guard. Attendees are invited to bring a lawn chair, wear a mask and practice social distancing. Services will be live-streamed via YouTube. In lieu of flowers, contributions may be made to Prospect United Methodist Cemetery Association, C/O Daniel Hurley, 5565 Ben’s Rd., Stewartstown, PA 17363.

Henry Marion Sommer, 79, of New Park, PA went home to the Lord on Tuesday, February 23, 2021. He was the husband of Glenda J. (McCleary) Sommer to whom he was married for 57 years. Henry was born on June 9, 1941 in Joppa MD and is the son of... View Obituary & Service Information

The family of Henry Marion Sommer created this Life Tributes page to make it easy to share your memories.

Send flowers to the Sommer family.