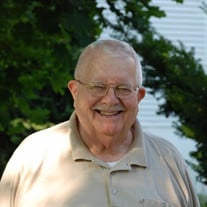 Hoover Yount passed from this life peacefully on Tuesday, January 25, at the age of 92, surrounded by family. Born in Detroit, MI, to the late Anthony Hoover Yount and Mabel (Galbreath) Yount. He is survived by Gail (Hughes), his loving wife of 63 years, four daughters, Rebecca Weihe (Paul), Barbara Campbell (David), Elizabeth Wolf (Martin), Carol Steinkirchner (Scott); grandchildren, Emma Weihe, Claire Weihe, Shay Steinkirchner, Riley Steinkirchner, Grace Campbell, and Haley Campbell. Hoover graduated from Westminster College in 1951, with a degree in Economics. He worked initially in the steel industry in the Pittsburgh area, taking a pause to serve a 2 year term in the Army. He was stationed in Hawaii, a place and experience he loved and talked about throughout his life. After the Army, he attended graduate school at Cornell and went on to a career in human resources that led him to jobs around the US including Ohio, Illinois, California and Michigan, before returning back to Pennsylvania. He was an innovator in the field of compensation management, and published articles and received recognition for his contributions to the field from the American Compensation Association. He met his wife Gail while he was living in Cleveland, OH, early in his career, and during their 63 year marriage, she gave him 4 daughters and a lifetime of love and devotion. Upon his retirement, they did extensive local travel and research, piecing together family history and documenting it for future generations. Hoover was a lifelong Presbyterian, and was an active member of Stewartstown Presbyterian Church, serving as an Elder and singing in the choir until recent years. He was also active in the Rotary Club of Southern York County, serving as song leader during his tenure there. He was a past member of The National Society for the Sons of the American Revolution, serving as Secretary for several years, and was also a member of New Freedom Lion’s Club. He loved to sing and was honored to be a member of the Cleveland Orchestra Chorus under Robert Shaw in his younger days. A published author and avid storyteller, he regularly submitted stories or articles on any topic that interested him to a variety of publications. He was a master of storytelling, lover of history, an avid outdoorsman, an animal lover and a man who enjoyed being in the company of others. In short, a man of many interests, talents and experiences who will be greatly missed by those who knew him. A Memorial Service for Hoover will take place on Saturday, February 12, 2022 at 1:00 p.m. at Stewartstown Presbyterian Church; 14 College Ave., Stewartstown, PA. Interment will be private. In lieu of flowers, the family suggests donations be made to the New Freedom Animal Rescue or Friends of Camp Security. www.HartensteinCares.com

Hoover Yount passed from this life peacefully on Tuesday, January 25, at the age of 92, surrounded by family. Born in Detroit, MI, to the late Anthony Hoover Yount and Mabel (Galbreath) Yount. He is survived by Gail (Hughes), his loving wife... View Obituary & Service Information

The family of Henry Hoover Yount created this Life Tributes page to make it easy to share your memories.

Hoover Yount passed from this life peacefully on Tuesday, January...

Send flowers to the Yount family.