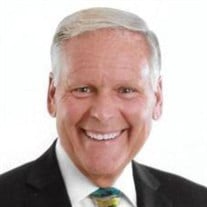 James (Jim) Epperlein, age 67, of Fort Pierce, Florida passed away peacefully on Thursday, February 25, 2021 after a valiant 12-year battle with Neuroendocrine Pancreatic Cancer. He was born on July 13, 1953 in Buffalo, New York to Werner and... View Obituary & Service Information

Send flowers to the Epperlein family.