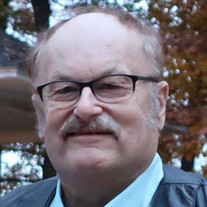 James Roger Wolf, 77, of Stewartstown, entered in to eternal rest Friday, April 22, 2022 at York Hospital. Jim was the son of George Wolf and the late Hazel (Anderson) Wolf. Born at home on July 18, 1944, Jim grew up working on the family farm. After graduating from Kennard-Dale High School in 1962, he spent many years as one of the original founders of Wolf Farms Inc., supplying the area with eggs and potatoes. Jim became a partner in Farm Boys Construction in the late 1980s, building some of the first homes in Stewartstown Station. In the early 1990s, Corner Enterprises Inc. began. The business would grow to include Stewartstown Spin Out Laundromat and CarWash, and Tres-C-Salon. Through the years Jim enjoyed driving semi-trucks, and his Honda Goldwing. His prized possession, a 1963 Chevy Impala convertible that he purchased new, and later restored, could be seen driving through town for many of the parades. Later in life, Jim enjoyed spending winters in Florida with his loving wife, Linda, with whom he spent 37 years. Many vacations with extended family and friends provide memories to help all of those that he left behind. In addition to his wife Linda (Ruff), Jim is survived by a large, loving family including his father, George and companion, Ginny Davis; son, Chris Wolf and wife, Connie; daughter, Kerri Momberger and husband, Paul; step sons, Joe Stike and wife, Rose; Rich Stike and wife, Robin; Brian Stike and wife, Arlene; step daughter, Tracey Covert and husband, Jay; 12 grandsons, 1 granddaughter, and 1 great grandson; brothers, Dan Wolf and wife Connie; Dave Wolf and wife, Judy; Steve Wolf and wife, Robin; sisters, Susan Herbert and husband, Bill; and Ginger Babcock and husband, Randy; and numerous nephews and nieces. Loved ones are invited to attend services to be held at the Stewartstown United Methodist Church, 26 S. Main St, Stewartstown, PA 17363 on Wednesday, April 27, 2022. A public viewing will be from 3p.m. -5 p.m. with a Service of Remembrance beginning at 5pm. In lieu of flowers, contributions may be made in Jim’s honor to the American Heart Association at www.heart.org or the American Diabetes Association at www.diabetes.org. There will be a time of fellowship and food following the Remembrance Service at the church and all are welcome to share memories of Jim. Hartenstein Funeral & Cremation Care, Inc., 19 S. Main St., Stewartstown, is assisting the family with the arrangements. HartensteinCares.com

James Roger Wolf, 77, of Stewartstown, entered in to eternal rest Friday, April 22, 2022 at York Hospital. Jim was the son of George Wolf and the late Hazel (Anderson) Wolf. Born at home on July 18, 1944, Jim grew up working on the family farm.... View Obituary & Service Information

James Roger Wolf, 77, of Stewartstown, entered in to eternal...

Send flowers to the Wolf family.