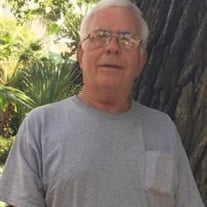 Jay W. Guess, 67, of Stewartstown, passed away peacefully, Saturday, April 18, 2020. He was the husband of Luz E. (Gaitán) Guess to whom he was married 46 years. Jay was a son of the late William W. Guess, Jr. and Jean (Galentine) Guess. A 1970 graduate of McGuffey High School in Claysville. Mr. Guess proudly served in the Armed Forces, completing his training in Ft. Dix, New Jersey. His first tour of duty landed him in Ft. Clayton, Rep. of Panamá where he met his loving wife, Luz. Mr. Guess retired from the Verizon Telephone Co. after 29 years as a communication technician. He was a former mason with the Sojourner Lodge Colón, Panamá (under the Grand Lodge of Massachusetts), Order of the Eastern Star #49 in Odenton, MD and of the Stewartstown American Legion. Jay was a Steelers, Pirates, and Penn State fan. He had been a community T-ball, recreation little league baseball, football, and scholastic wresting coach throughout the years wherever he resided. He helped erect the batting cage in Stewartstown fairgrounds in the early 90’s. He enjoyed the outdoors, music, traveling, and was an avid reader. He was a handyman, “jack of all trades”, a generous, caring husband, father, grandfather, and friend. In addition to his wife Luz, he is survived by three children Dae W. Guess (Stacy), Christina M. Getz and Joseph A. Guess; six grandchildren; one great-grandson; two brothers Andrew Paul Guess (Sherri) and Theodore James Guess; one niece and two nephews. Jay was preceded in death by a daughter Tiffany Jean Guess and a sister Donna Ann Cosner. Services will be private at the convenience of the family. Memorial contributions may be sent to the American Legion in your local community in memory of Jay William Guess. Hartenstein Funeral & Cremation Care, Inc., Stewartstown is assisting the family during this time.

The family of Jay W. Guess created this Life Tributes page to make it easy to share your memories.

Send flowers to the Guess family.