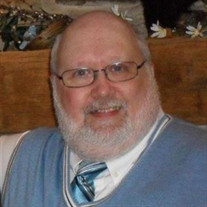 Jeffrey A. Rohrbaugh, 58, of Shrewsbury passed away Wednesday, June 10, 2020 at his residence. He was the loving husband of Donna L. (Mummert) Rohrbaugh to whom he was married since 2011. Born in York, he was the son of the late Raymond F. and Mary F. (McFadden) Rohrbaugh. Jeff graduated from Susquehannock High School in 1979 and received his drafting degree from YTI and his Bachelor’s degree in graphic design from AIU on-line. He worked for AMP, Inc until they closed, then worked at APS and then was a salesman with Bon-Ton. He enjoyed playing the trombone and baritone in the Southern York County Band and Brodbecks Band and often expressed how much he missed it. His favorite hobby was word-play and he considered it his mission in life to make people smile. Even on his sickest days, he could always come up with a joke or silly expression that made his caregivers laugh. Jeff loved local history, especially the history in Shrewsbury, and collecting memorabilia from the area. He was a very talented graphic designer and has computer files full of hex signs, quilt patterns and optical illusions that he created. He loved a wide variety of music, from old country, bluegrass, folk, big band, and many others, which he shared with his family and caregivers. Jeff’s most favorite hobby of all in recent years was to go to the Markets at Shrewsbury, where he would stay for hours and visit with all his valued friends there. His biggest regret in the last few months was not being able to visit each week due to the COVID-19 restrictions. In addition to his wife Donna, he is survived by two sisters, Jeanette Boone and Bonnie Hain; three nephews and two great-nieces; father-in-law Richard Mummert; two brothers-in-law and their families and many “adopted” nieces and nephews. He was pre-deceased by his parents and his mother-in-law, Barbara Mummert. A Celebration of Life will be planned at a later date, when it is safer for his many friends to gather to honor his life. Hartenstein Funeral & Cremation Care, Inc., New Freedom is assisting the family during this time. Memorial contributions may be made per his wishes to the American Heart Association, 4250 Crums Mill Road, Suite 100, Harrisburg, PA 17112; or to the Cleveland Clinic, Miller Family Heart and Vascular Institute, 9500 Euclid Ave, Cleveland, Ohio, 44195.

Jeffrey A. Rohrbaugh, 58, of Shrewsbury passed away Wednesday, June 10, 2020 at his residence. He was the loving husband of Donna L. (Mummert) Rohrbaugh to whom he was married since 2011. Born in York, he was the son of the late Raymond F. and... View Obituary & Service Information

The family of Jeffrey A. Rohrbaugh created this Life Tributes page to make it easy to share your memories.

Jeffrey A. Rohrbaugh, 58, of Shrewsbury passed away Wednesday,...

Send flowers to the Rohrbaugh family.