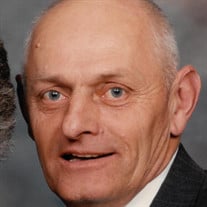 John Walton Marsteller Sr., 87, of Stewartstown, went home to the Lord on Tuesday, June 16, 2020, at Country Meadows of Leader Heights. Born at his parents' home in East Hopewell Township near Stewartstown, he was the son of the late Harry W. and Mary Helen (Manifold) Marsteller. He was the devoted husband of the late Mary Elizabeth (Ramsay) Marsteller who went home to the Lord on June 2, 2020. John graduated from Stewartstown High School, Class of 1951. He was a self-employed farmer all his life beginning in his teenage years due to his father's extended illness. He was a member of St. Matthew Evangelical Lutheran Church, where he was an usher and was on church council. He was a member of FFA and won numerous FFA awards, including the American Farmer Degree in 1954. He was a member of the South Eastern Ag Advisory Board. Together John and Mary were members of the Kennard-Dale Young Farmers and received the community service award for Pennsylvania Young Farmers in 1978. John and Mary enjoyed taking vacations with their children as they were growing up. Later in life as a couple, they traveled throughout the US, took several cruises, and traveled to Europe. John is survived by his three children John W. Marsteller, Jr., Martha E. Halvorson and her husband Kevin, Susan M. Helms and her husband Stephen; eight grandchildren, Jason Rineholt and his wife Alecia, Matthew Rineholt and his wife Morgan, Jeromey Marsteller, Heather Grove and husband Corey, Catherine, Victoria, Daniel and Timothy Halvorson; six great grandchildren, Ava, Austin and Paige Grove; Daniel, Elizabeth and Sara Rineholt; son-in-law Donald Rineholt, sisters Jean Ruff, Edith Matthews, and Janice Felzenberg and her husband David; and numerous nephews, nieces, and cousins. He was preceded in death by his wife Mary, his parents, a daughter Helen E. Rineholt, a grandson Nathan Lee Marsteller, a sister Ruth Trout, and brothers-in-law Charles Trout, Marcus Ruff, and Fred Matthews. There will be a viewing on Sunday, June 21, from 5-7 p.m. at Hartenstein Funeral & Cremation Care, Inc., 19 S. Main St., Stewartstown. There will be a second viewing from 9:30-10:30 a.m. Monday at the North Hopewell-Winterstown Volunteer Fire Company, 12246 Winterstown Road, Felton, PA 17322 with a funeral service celebrating not only John’s life, but Mary’s as well, at 10:30 a.m. Guests are kindly asked to wear a mask to both the viewings and the service to keep everyone safe. John will be laid to rest next to his beloved Mary at Round Hill Cemetery immediately following the service. If desired, memorial contributions may be made in John and Mary's memory to St. Matthew Evangelical Lutheran Church Library, Choir, or Food Pantry at 839 W. Market St., York, PA 17401.

John Walton Marsteller Sr., 87, of Stewartstown, went home to the Lord on Tuesday, June 16, 2020, at Country Meadows of Leader Heights. Born at his parents' home in East Hopewell Township near Stewartstown, he was the son of the late Harry W.... View Obituary & Service Information

The family of John W Marsteller Sr. created this Life Tributes page to make it easy to share your memories.