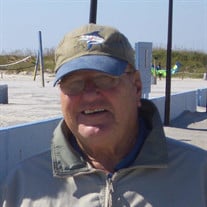 John Henry Swam, Jr., 85, of Manchester, MD passed away Saturday, July 4, 2020 at his residence. He was the loving husband of the late Jane L. (Reinecker) Swam who passed away in 2014. Mr. Swam graduated from the Manchester High School Class of 1952. In school, John was an excellent scholar and devoted athlete. He was a starter on both the Championship basketball and soccer teams. Following graduation John joined his father, John Sr, in the construction business in Baltimore, Maryland. Shortly after, he was drafted into the US Army where he worked on the Nike Missile Program. Upon completing his service in the military, John returned to Manchester, Maryland and was employed at the Martin Marietta Aircraft Company. During his time there, John continued to work on missile and aircraft projects, as well as the Gemini and Apollo space programs. He was personally responsible for training many of the U.S astronauts on the Apollo Lunar Module flight simulator. John’s next career stop was in Frederick, Maryland where he joined a Material Handling and Automation Engineering Design and Project Management Corporation. Among their most notable projects was the US Library of Congress in Washington D.C. where John was a significant contributor to the projects design and engineering. His next career opportunity led him to join the Black & Decker Manufacturing Company in Towson, Maryland. John was responsible for the new material handling for the Hampstead Plant. He was selected to head worldwide sourcing of materials, parts and components, and complete product and product lines for Black & Decker’s world marketing network. John spent his leisure time with family and friends. He loved being on the water, was an avid fisherman and spent much of his time vacationing to Ocean City where he and his family had a home. He is survived by a son Jamie E. Swam and wife Erin of Stewartstown; two step-children John S. Wood of Manchester and Shelley A. Schwanke and husband Dennis of Glen Rock; seven grandchildren Marin Iova Swam, John Wood, Jacie Wood, Matthew Schwanke, Lucas Schwanke, Eric Schwanke, , Jennifer Hoffman and husband Brett; three great-grandchildren Bayleigh, Koleman and Chayce Hoffman; one brother Robert Swam and wife Carol; one sister-in-law Phyllis Zumbrun and multiple nieces and nephews. John was preceded in death by two grandchildren Erin Orwig and Evan Schwanke, two sisters Patricia Martak and Annabelle Baer and one brother Elwood Swam. Services and burial will be held at the convenience of his family. Hartenstein Funeral & Cremation Care, Inc., New Freedom is assisting the family during this time. In lieu of flowers, contributions may be made to the Westminster Rescue Mission, 658 Lucabaugh Mill Rd., Westminster, MD 21157. John Henry Swam Jr. had a very successful career and is remembered for his many contributions in the field of technology. His family and friends will miss his loving and selfless personality.

John Henry Swam, Jr., 85, of Manchester, MD passed away Saturday, July 4, 2020 at his residence. He was the loving husband of the late Jane L. (Reinecker) Swam who passed away in 2014. Mr. Swam graduated from the Manchester High School Class... View Obituary & Service Information

The family of John Henry Swam, Jr. created this Life Tributes page to make it easy to share your memories.

Send flowers to the Swam, family.