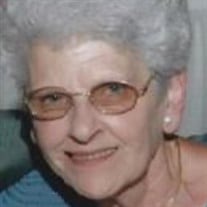 Joyce A. “Granny” (Leffler) Schnetzka, age 79, entered into rest on August 1, 2021. She was the wife of 47 years to the late Harold A. Schnetzka, who passed away on October 12, 2008. Joyce was born on September 24, 1941 in York, PA to the late Charles and Ruth (Kennedy) Leffler. Joyce graduated from William Penn High School in 1960 and worked at various sewing factories over the years. She retired from 20 years plus of employment at Graham Architectural. She was also employed by Chartwells in the cafeteria at the South Eastern School District from 2004-2011 and was currently employed at the Stewartstown Senior Center as a kitchen aide from 2012 until her death. Joyce was a life-long member of Hopewell Presbyterian Church in Felton, PA and was a member of the Auxiliary at Eureka Volunteer Fire Company. She enjoyed playing bingo, helping at church picnics, and most recently, volunteering at the clothing bank in New Freedom every Saturday morning. She is survived by her daughters, Linda A. Miller, and her husband, Dean H., of Stewartstown, Jean A. Hawbaker and her husband, Charles, of Gardners; 4 loving grandsons, Ryan Miller and his wife, Kyrsten, Matthew Houston and his wife, Savanna, Nicholas Houston, Justin Hawbaker; “like a grandson” Johnny Ayres and his wife, Maryjane; 6 beautiful great-grandchildren, Audrey & Sarah Ayres, Weston & Lindsey Miller, and Trevor & Alaina Houston; loving siblings, Lorry Bonney of Delaware and Tyrone Leffler and his wife, Roxann, of Red Lion, PA; she was preceded in death by her daughter, Kay A. (Schnetzka) Houston, who passed away on August 5, 2006 and her dear granddaughter, Ashley (Miller) Ayres who passed away in 2017. A viewing will be held on Sunday, August 8th from 1 pm- 3 pm at Hopewell Presbyterian Church 8426 Church Rd., Felton, PA 17322. A Funeral Service will begin at 3:00 pm with an interment immediately following at the Church Cemetery. In lieu of flowers, Memorial Contributions may be made to the Stewartstown Senior Center, 26 S. Main St., P.O. Box 235 Stewartstown, PA 17363 or Eureka Volunteer Fire Company, 82 North Main St. Stewartstown, PA 17363. All Arrangements are being handled by Hartenstein Funeral & Cremation Care, Inc., Stewartstown, PA. www.HartensteinCares.com

The family of Joyce A. Schnetzka created this Life Tributes page to make it easy to share your memories.

Send flowers to the Schnetka family.