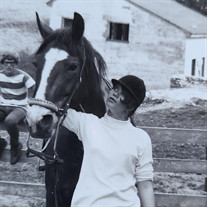 Lisa Maria Grisamore, nee Ferguson, entered into Jesus’s loving arms on November 9, 2021. Her death was sudden and unexpected to her family, however, our Heavenly Father decided Lisa's time and suffering on this earth was over and it was time for her to come home. Lisa was born to the late Mary (Fleckenstein) Ferguson and became the daughter of the late, William Ferguson when she was 4-years-old. Lisa entered this world with her twin brother, Mark Ferguson, on April 18, 1956. Lisa was kind, loving, and free spirited and had a passion for horses. She enjoyed gardening in her younger years and her favorite flower was the peace rose. Above all else, Lisa was most proud of her children and grandchildren. She spent the last years of her life living with and caring for her three grandsons. Lisa is survived by her son, Edward Bailey and his wife, Joanne Bailey, daughter, Kimberley Bailey and husband, Brock Brauer; adoring grandchildren Gavin Bailey, Jesse Bailey-Motts, and Jonah Bailey; former husband, Jesse Bailey; dear sister Andrea Filtzmoyer, brother, Charles Baker, and twin brother, Mark Ferguson. She is preceded in death by her beautiful niece, Karen Filtzmoyer. In lieu of flowers, memorial donations may be made in Lisa's memory to the National Alliance on Mental Illness, nami.org. A memorial service for Lisa will be held on December 1, 2021 at 11 a.m. at St John's Evangelical Lutheran Church in Phoenix, Maryland. Her service will be in the Chapel where she married her former husband and friend, Jesse Bailey.

Lisa Maria Grisamore, nee Ferguson, entered into Jesus&#8217;s loving arms on November 9, 2021. Her death was sudden and unexpected to her family, however, our Heavenly Father decided Lisa's time and suffering on this earth was over and it... View Obituary & Service Information

The family of Lisa Maria Grisamore created this Life Tributes page to make it easy to share your memories.

Send flowers to the Grisamore family.