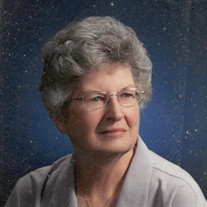 Mary Lou Kurman passed away at her home on October 3rd. She was the loving wife of 43 years to the late Walter A. “Toby” Kurman. Mary Lou was born on November 27, 1931 in York, PA to the late Clayton S. Norris and Mary (Yost) Norris. After Mary Lou’s graduation from Stewartstown High School, she worked at the Stewartstown Sewing Factory for a short period of time. She moved on to the Stinson Family Dental practice where she worked for sixteen years as a Dental Assistant. Most people would know Mary Lou from the Norris Grocery Store, where she worked until her retirement with her mother, Mary. Mary Lou was a member of the Stewartstown United Methodist Church, where she sang in the choir for many years. She loved putting together puzzles, and playing the card game, 500, on a weekly basis. She was masterful at the art of Counted Cross stitch and Crocheting. At one point she had crocheted over two hundred and sixty caps, sweaters, and blankets for preemie babies through Mission Central. Mary Lou is survived by her children, Michael A. Kurman and Marcia A. Kurman; and her siblings Gloria Norris, Thomas Norris and his wife, Joan, and David Norris and his wife, Jean. A Memorial Visitation will be held at Hartenstein Funeral & Cremation Care, Inc., 19 S. Main St., Stewartstown, PA 17349, on Monday, October 11th, from 10:00 am-11:00 am. A Funeral service will begin at 11:00 am Officiated by Rev. Keith Braucher. Interment is private. In lieu of flowers, donations may be made to Mission Central, 5 Pleasant View Dr., Mechanicsburg, PA 17050.

The family of Mary Lou Kurman created this Life Tributes page to make it easy to share your memories.

Mary Lou Kurman passed away at her home on October 3rd. She was...

Send flowers to the Kurman family.