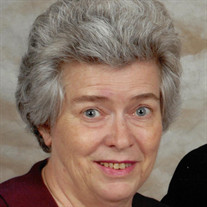 Mary Elizabeth (Ramsay) Marsteller, 82, of Stewartstown, went home to the Lord on Tuesday, June 2, 2020 at Colonial Manor, York. Born in West York at her great grandparents’ home, she was the daughter of the late Kurvin Richard and Grace Elizabeth (Sheffer) Ramsay. She was the wife of John W. Marsteller, Sr., formerly of Stewartstown; together they celebrated 60 years of marriage on March 20. Mary graduated from William Penn Senior High School, Class of 1956. She was a homemaker and farm wife. She was a member of St. Matthew Evangelical Lutheran Church, where she sang in the choir, was on church council and Stephen Ministry. She was a 4-H leader. She enjoyed crocheting, knitting, and sewing. She loved vegetable gardening, canning, cooking and baking. Mary was an accomplished accordion player and learned to play the piano later in life. In addition to her husband John, Mary is survived by her three children John W. Marsteller, Jr., Martha E. Halvorson and her husband Kevin, Susan M. Helms and her husband Stephen; eight grandchildren, Jason Rineholt and his wife Alecia, Matthew Rineholt and his wife Morgan, Jeromey Marsteller, Heather Grove and husband Corey, Catherine, Victoria, Daniel and Timothy Halvorson; six great grandchildren, Ava, Austin and Paige Grove; Daniel, Elizabeth and Sara Rineholt; son-in-law Donald Rineholt, sisters-in-law Jean Ruff, Edith Matthews and Janice Felzenberg; and two first cousins. She was preceded in death by her parents, a daughter Helen E. Rineholt, grandson Nathan Lee Marsteller, a special Aunt Viola Jones, and sister-in-law Ruth Trout. Due to Covid-19 and Governor Wolf’s restrictions, we are limited to 25 people and are very saddened that we cannot have family and friends for the viewing and service. This would not be our mother’s desire. We hope to have a memorial service later. Memorial contributions may be made in Mary’s memory to: St. Matthew Evangelical Lutheran Church Library or Choir Fund, 839 West Market Street, York, PA 17401. HartensteinCares.com

Mary Elizabeth (Ramsay) Marsteller, 82, of Stewartstown, went home to the Lord on Tuesday, June 2, 2020 at Colonial Manor, York. Born in West York at her great grandparents&#8217; home, she was the daughter of the late Kurvin Richard and Grace... View Obituary & Service Information

The family of Mary Elizabeth Marsteller created this Life Tributes page to make it easy to share your memories.