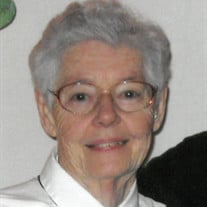 Maude Elizabeth “Betty” (Morris) Marsteller, 96, died at her home on Tuesday, March 3, 2020 surrounded by her family. She was the wife of the late Wm. Dale Marsteller who died June, 2008. Born December 16, 1923, in Fawn Grove, Pa, she was the daughter of the late Charles Everette “Dick” & Beulah (Marsteller) Morris. After she graduated from Fawn Township High School, she attended Goldey Beacon College in Wilmington, Del. She then went to work at the Aberdeen Proving Grounds. It was during the War that she became Secretary & Manager of the front office at the Signal Corp. for many years. After leaving the Signal Corp. she worked for her brother, Rolland Morris as Secretary for the Fawn Grove Service Station in Fawn Grove, Pa until she retired. She was an active member of Centre Presbyterian Church since 1945, Sunday School Teacher, President of the Women’s Assoc., Deacon, Choir Member for 50 years, a member of Genealogical Society of PA and MD. She was a Girl Scout Leader and took the girls on a trip to their camp in Coudersport, Pa for several days. She was Worthy Matron & District Deputy Grand Matron of 16D Order of the Eastern Star, Triangle Chapter # 483 in Shrewsbury. She loved genealogy & published 3 history’s – Marsteller, Morris & Cross, and did much research of many other lines. She also loved knitting & crocheting and had knit afghans for all her children and grandchildren. She enjoyed cooking and baking for her family. She and her husband had traveled to most States, Canada, Alaska and Hawaii. She is survived by two sons, Everette Dale “Jim” Marsteller and his wife, Karen, and Richard W. “Rick” Marsteller and his wife, Terri, all of New Park; a daughter Barbara A. Wilson and her husband, Donald “Willy” of Stewartstown; seven grandchildren, (Wm. Donald “Chip” Marsteller – preceded her in death) and his wife, Beth, Chad E. Marsteller and his wife, Wendy, Angie L. Agee, Ryan C. Marsteller and his wife, Melissa, Eric D. Wilson and his wife, Caroline Meredith, Ashley A. Wiley and her husband, Trayer and Drew Marsteller and his wife, Emily; thirteen great- grandchildren, Derek, Shane, Madison, Claire, Miles, Haley, Brandon, Nathalie, Nicholas, Olivia, Ryleigh, Seitel & Rhett; one brother D. Russell Morris and his wife, Carol, of Fawn Grove, and two brothers deceased, R. Rolland Morris and Everette “Jim” Morris – killed in WW2, & many nieces and nephews. The family would like to thank Deanie King, for providing our family with, Bobbi Jo Flaharty, one of Betty’s caregivers. Bobbi Jo was a huge blessing, and became a special part of our family. We also thank Sherry Hyde & Mary Doherty, who both came on board, later, as caregivers, who helped and cared for mom. In addition, we thank God for providing Lisa Ayres, who helped out temporarily with mom in the very beginning. Last, we thank Heartland Hospice for providing, their loving and compassionate services, and also for providing us with: Deb, Kelly, Matt, Karen, Joyce, Margie and Sandy. We loved them all and were blessed with their individual gifts in helping Betty to remain peaceful when leaving to go home. Viewing will be held on Saturday, March 7, 2020 from 9:30 AM – 11:00 AM at Centre Presbyterian Church; 83 New Park Rd., New Park, Pa with Eastern Star Service to begin at 11:00 AM, followed by the main service, with the Pastor Don Hackett officiating. Interment will be in Centre Presbyterian Cemetery. Hartenstein Funeral & Cremation Care, Inc., Stewartstown is assisting the family. In lieu of flowers, memorial contributions checks may be payable to Centre Cemetery Association c/o Donald Wilson; 15379 Barrens Rd. N. Stewartstown, Pa 17363. www. HartensteinCares.com

The family of Maude E. "Betty" Marsteller created this Life Tributes page to make it easy to share your memories.