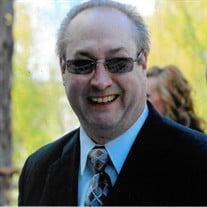 Michael J. Malek, 57, of Stewartstown, PA, passed away unexpectedly, February 3rd, in York Hospital, surrounded by his loved ones. Michael was born in Niagara Falls, NY, on March 7, 1964. He graduated from Hanover High School and received a bachelor’s of Computer Science degree from Slippery Rock University. He was employed at UPS, for 32 years. He was a dedicated, hardworking man, he enjoyed his career and his colleagues, many becoming lifelong friends. Michael enjoyed golfing, he played on the Tuesday two man league at Pleasant Valley Golf Course in Stewartstown, PA. He played for many years with is son, Joshua, where there was always a little friendly competition. Who won? Depends on who you asked. He enjoyed fishing, and boating with his son, Jacob. It was always catch and release, he hated fish! Michael was a director of the SEFA Football League for many years, he enjoyed all of the players, especially his sons, Jacob and Nathan. He also loved his dogs, Max, Ruby and Millie, they are missing him terribly. You could always hear Mike before you saw him, he had a booming voice that always had a joke or funny story. He loved making people laugh and always said he was the funniest Malek. His laughter will be missed. He is survived by his wife of 32 years, Sarah M. Malek; and sons, Joshua, Jacob and Nathan of Stewartstown, PA; father, Frank Malek of Wilkes Barre, PA; and sister, Kathy Malek of Lebanon, PA; sister in laws, Laura, Mary Kay, Debbie, Linda and families, who loved him like a brother; nieces and nephews, Jennifer, Michael, Jason, Mary Beth, Rebecca, and Albert, who spent their summer vacations and holidays with Uncle Mike, he was always looking for fun and always found it, he was the Biggest kid at the kids table. Michael had 6 great nieces and nephews that loved spending time with him. Michael is preceded in death by his infant son, Zachary Malek; his mother in law, Sally Konefal; and his mother, Mary L. Malek, who sadly passed away on January 28, 2022. May they rest in peace together. A public viewing will be held on Monday, February 7th, from 5:00 pm- 8:00 pm, at Hartenstein Funeral and Cremation Care, Inc. 19 S. Main St., Stewartstown, PA 17363. Burial will be held Wednesday, February 9th in Wilkes Barre, PA. Details to be announced. In lieu of flowers, memorial contributions, may be made to the American Diabetes Association or Children’s Miracle Network.

Michael J. Malek, 57, of Stewartstown, PA, passed away unexpectedly, February 3rd, in York Hospital, surrounded by his loved ones. Michael was born in Niagara Falls, NY, on March 7, 1964. He graduated from Hanover High School and received a... View Obituary & Service Information

The family of Michael James Malek created this Life Tributes page to make it easy to share your memories.

Send flowers to the Malek family.