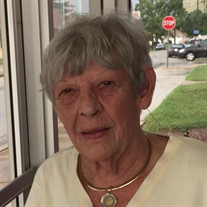 Nancy L. Kottcamp, 86, passed away May 13, 2021. She was the loving wife of Edward H. Kottcamp Jr. and they celebrated 64 years of marriage in September of 2020. Born in York, she was the daughter of the late L. Roger and Dorothy A. (Jacobs) Shirey. She worked as an Executive Secretary for many years for Bethlehem Steel and also had worked at Lehigh University as a secretary to the music department. Among many interests, Nancy held a lifelong passion for music, art, and theater. She was an avid follower of the classics of the Golden Age of cinema and musicals, in particular. Moreover, she was delighted by the connection music had with dancing and storytelling. Her father had a major influence on her love of live, musical entertainment as he was a member of an instrumental group during the big band era. Nancy admired and praised her dad’s ability as a musician and entertainer. Her affinity for song and dance was embedded in her roots long before she was born. Nancy was a reader of many genres on a daily basis, including the ideas and beliefs of the religion of Christian Science. Her study of this discipline gave her the strength and guidance for her journey through life. She was very active in church, including serving as a religious educator and gospeler. Her life-long devotion to her faith was deeply important and evident on a frequent basis resulting in a positive influence on her children. Indeed, Nancy’s greatest joy in life was her three beloved boys. Most of her life she was the quintessential full-time mom: mentor, teacher, one and only chef, nurse, chauffer, religious authority, cheerleader, therapist, homework- helper, homemaker, girlfriend advisor, holiday decorator, Santa Claus, Easter Bunny, and designated driver, to name just a few. Her hard work and devotion came to fruition as she served as a loving, cohesive part of the lives of three unique adults of very different professions, personalities and interests. She also became a grandmother three times over! Throughout the growth of her children and grandchildren, Nancy was the matriarch and chief confidant during numerous vacations to the beach, ski trips, travel to various parts of the country, holidays, birthdays and special events. Her spirit and loving soul will be dearly missed but cherished forever in all of her family’s hearts. Surviving in addition to her husband are her three boys, Robert E. Kottcamp of Miami Beach, FL, Edward H. Kottcamp II and his wife, Michele of Georgetown, MA, and Timothy L. Kottcamp of Falls Church, VA; 3 grandchildren; and a sister, Harriett Reuse and her husband, Raymond. Services and interment will be at the convenience of her family. Hartenstein Funeral & Cremation Care, Inc. of New Freedom is assisting the family with the arrangements. HartensteinCares.com

Nancy L. Kottcamp, 86, passed away May 13, 2021. She was the loving wife of Edward H. Kottcamp Jr. and they celebrated 64 years of marriage in September of 2020. Born in York, she was the daughter of the late L. Roger and Dorothy A. (Jacobs)... View Obituary & Service Information

Send flowers to the Kottcamp family.