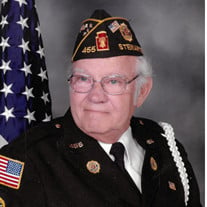 On October 4th, 2019, Peyton Harry Anderson Sr., of Pylesville, Maryland, passed from this life while resting comfortably at home. Peyton had the responsibility of being the first of nine children born to Ruth Harriet and Thomas Roland Anderson, on November 18th, 1932. Unlike his siblings, Peyton was born in Algiers, Louisiana. The family migrated north to Dundalk, MD, finally setting roots deep in Harford County. He honorably served his country during the Korean War from 1950-1954, stationed aboard the USS Rush. On March 10th, 1956, Peyton married the love of his life, Emma Jean Eshelman. They shared 58 years of marriage. Together they raised four children. Peyton was fortunate to enjoy a long retirement after thirty years of commuting 80 miles a day to General Motors Corporation in Baltimore. Being an outdoorsman, Peyton was an excellent marksman. He enjoyed hunting, crabbing, fishing, and camping. A true Marylander, he loved seafood of all kinds. He spent hours shucking oysters with his brother Mick. He was an avid Raven’s fan who enjoyed watching their games with family and friends. Peyton also loved to spend hours working in his garden. Peyton’s service to his country didn’t end with a discharge from the Navy. He was a lifetime member of both the American Legion and the Veterans of Foreign Wars. Peyton served as the Stewartstown American Legion Historian. He received the prestigious Legionnaire of the Year Award from the American Legion in 2005. In addition to helping organize fundraisers, he was proud to honor our nation’s heroes by serving in the color guard. Arising from life’s hardships, Peyton’s faith in God was strengthened by many challenges. Peyton’s faith made it easy for him to put others before himself. If you were fortunate enough to be his neighbor, your life was greatly enriched. Peyton was grateful for the assistance of neighbors and friends in his times of need. Peyton is survived by his son, Robert; four grandchildren, Julie, Kelly, Mark, and Nicole, as well as twelve great grandchildren. He is also survived by two sisters, Joyce and Ruth and three brothers, Jimmy, Tom, and Richard. He is preceded in death by his wife, Emma Jean, his two daughters, Joanne and Becky, his son Peyton Jr., and his beloved siblings, Jack, Anne, and Mick. Peyton’s funeral service will be held Wednesday, October 9, 2019 at 12:00 PM from Hartenstein Funeral & Cremation Care, Inc., 19 S. Main St. Stewartstown. Interment will follow in Ayres Chapel Cemetery in White Hall, Maryland with military honors. A visitation with his family will be held from 10AM until the time of his service on Wednesday at the funeral home. Memorial contributions may be made to the Stewartstown American Legion, 19222 Barrens Rd. Stewartstown, PA 17363.

On October 4th, 2019, Peyton Harry Anderson Sr., of Pylesville, Maryland, passed from this life while resting comfortably at home. Peyton had the responsibility of being the first of nine children born to Ruth Harriet and Thomas Roland Anderson,... View Obituary & Service Information

The family of Peyton Harry Anderson, Sr. created this Life Tributes page to make it easy to share your memories.