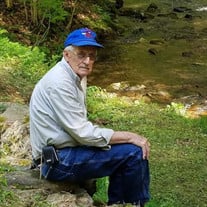 Richard K. Markey, 89, of York, passed peacefully into the arms of his Lord and Savior on Tuesday, November 16, 2021. Born in York Twp. on February 13, 1932, he was the son of the late Walter E. and Emma (Krout) Markey. He was the loving husband of Gladys L. (Kern) Markey of York. They were married on October 28, 1951 and were blessed to recently celebrate their 70th wedding anniversary. In addition to his wife, Gladys, Richard is survived by their four children, Joyce McWilliams and her husband, Jay of Windsor, Jane Markey of York, Jill Chronister and her husband, John of York, and Jack Markey of Seven Valleys; 6 grandsons; 14 great-grandchildren; and three siblings, Walter Markey, Jr., Phillip Markey and Sarah Markey. He was preceded in death by five siblings, Michael Markey, Mildred Myers, Donald “Donnie” Markey, Patta Smyser, and Ruth Fitz. Richard graduated from William Penn Sr. High School in York. Prior to his career, he worked on his father’s farm, drove school bus for Dallastown Area School District and worked at York Building Products. Richard worked as a construction foreman for 20 years alongside his brother, Donald, at Donald Markey Construction. He later worked at K&M Home Center, Inc. Richard was a passionate outdoorsman. He enjoyed hunting of all kinds, fishing with his trusty secret fishing lure, & especially loved passing down the love of the outdoors to his children and grandchildren. He was a patient teacher, untangling many fishing lines and helping to track many harvested deer for his grandsons over the years. His love of nature could be seen in another hobby he enjoyed- painting. Richard was a successful artist who specialized in wildlife and nature scenes and even had a painting featured on the cover of the Pennsylvania Game News magazine. Richard enjoyed sports and was a coach for various softball/baseball teams throughout the years. During baseball season, you could often find Richard and Gladys at home watching Yankee games together, probably while enjoying a big bowl of Carmen’s ice cream. Richard was also a long time member of New Fairview Church of the Brethren where he served as a Sunday School Teacher for many years. Richard will be remembered for his love and dedication to God and his family. His legacy is celebrated and his passions will be passed down through generations to come. Relatives and friends of Richard are invited to celebrate his life at a funeral service to be held on Tuesday, November 23, 2021 at 11:00am at New Fairview Church of the Brethren- 1873 New Fairview Church Rd., York, PA. Pastor Doug Striebig and Pastor Jay McWilliams officiating. There will be a public viewing before the service from 10:00-11:00am at the church. Interment will follow in New Fairview Church (Stump’s Union) Cemetery. Arrangements by Hartenstein Funeral & Cremation Care, Inc., 24 N. Second St., New Freedom, PA. In lieu of flowers, contributions may be made to: St. Jude Memorial Giving; 501 St. Jude Place, P.O. Box 1000 Dept. 142, Memphis, TN 38148-0142.

Richard K. Markey, 89, of York, passed peacefully into the arms of his Lord and Savior on Tuesday, November 16, 2021. Born in York Twp. on February 13, 1932, he was the son of the late Walter E. and Emma (Krout) Markey. He was the loving husband... View Obituary & Service Information

The family of Richard K. Markey created this Life Tributes page to make it easy to share your memories.

Richard K. Markey, 89, of York, passed peacefully into the arms...

Send flowers to the Markey family.