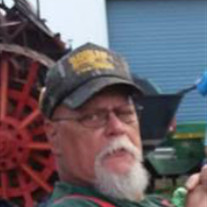 Roman P. “Pete” Lucabaugh, Jr., 67, of Glen Rock, PA entered into rest on January 4, 2021. Pete was born on November 14, 1953 on the Eglin U.S. Air Force Base in Pensacola, Florida. He was a son of the late Roman P. Lucabaugh, Sr. and Wilma (Waugh) Lucabaugh. He graduated from York County School of Technology, studying Machine Maintenance, Class of 1971. He also was certified as a cosmetologist, graduating from Empire Beauty School in York. He worked for Teamsters Harley Davidson and most recently for Markey Trucking, Inc. Pete’s CB Handle was known by many as “Breakdown.” He was a member of the Maryland Steam and Historical Society; Association for Historic Preservation and Operation of Antique Equipment; and active for many years in the Early American Steam and Historical Society, Steam-O-Rama in Windsor. He also was a member of International Harvester Member Club and MD Lineboro Volunteer Fire Dept., where he was a firefighter and EMT. Pete is survived by his two siblings, John W. Lucabaugh & his wife Angela of Hagerstown, MD and Karen L. Bare & her husband Tim of Glen Rock; a niece and three nephews, Andrew & Joseph Bare and Cayleigh & Jesse Lucabaugh. Pete was a very sentimental and exceptionally dedicated man to his family and their values. He was close to all his family and was a great uncle to his niece and nephews. He looked forward to playing Santa and enjoyed coaching baseball, both for his cousin’s children. He treasured the time he spent with his father; together they were members of the antique Tractor Pulling Association and as Pete would often say, “he was the driver, with his father as his crew chief.” Pete had a caring heart for all animals, especially his cats. His final joy included his antique tractors and his steam engine. His family and friends will dearly miss him. A memorial service will be held at a later date at the convenience of the family. Memorial contributions may be made to: Maryland Steam and Historical Society; 16020 Carnival Ave, Upperco, MD 21155.

The family of Roman P. "Pete" Lucabaugh, Jr. created this Life Tributes page to make it easy to share your memories.

Send flowers to the Lucabaugh family.