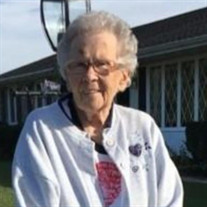 Ruth Shaw Kulpon passed away on December 28th at York Hospital, surrounded by her loving family. She was the wife of the late John Xavier Kulpon to whom she was married for 35 years. Ruth was born on July 30, 1921 in Hopewell Township, York County. She was the daughter of the late Russell C. and Ella Mae Shaw. Ruth is survived by her only daughter, Carole Kulpon Long, Michael C Long, and only granddaughter Gretchen Carole Long. Ruth was preceded in death by her brother Clay W. Shaw. Ruth was a graduate of Elizabethtown College with a degree in education. She was a co-owner of Kulpon’s Fruit Farm along with her husband John, for over 30 years. These two visionaries initiated some of the concepts that helped the Pennsylvania fruit growers introduce the public to visiting the farm and picking their own fruit. The entire family worked hard to become one of the largest suppliers of apples to well-known canneries and food manufacturers in Adams County that continue to be family favorites to this day. There was not one task that Ruth could not do around the farm and always stepped up to make sure that the business ran smoothly. While continuing to manage the farm, Ruth started teaching Business Education at the newly built Kennard-Dale High School in 1952. Ruth was head of the Business department for many years. Teaching was a passion of hers, and even after retirement she continued to stay in touch with her students and often found ways to support their successes and businesses. Ruth was a member of the Stewartstown Presbyterian Church, where she was a Sunday School teacher and Secretary to the congregation for many years. She also was a member of the Eastern Star, and the Barrens Chapter of the Daughters of the American Colonists. Ruth enjoyed traveling with her husband John and often found herself the center of attention with her fun-loving Polka Dancing husband from the Poconos. Later, Ruth enjoyed traveling with her family and taking them on “Once in a Lifetime” vacations that became wonderful memories for her family. Along with these vacations, she always made sure that her family was taking part in the arts and ensured that tickets were purchased to go to the Symphony and Theatrical Shows. Ruth adored her extended family. Her nieces and nephews held a special place in her heart. She took interest in their professional and personal successes. She loved being involved in the restoration of the family farmhouse where she was born. Ruth often spoke of her dream trip to Europe with her niece, traveling through the countries and having the time of her life. Even family that lived out of state always found a way to visit for birthdays and holidays. She enjoyed that even when their lives became busy, they still took the time call or write. The family would like to thank Ruth’s in-home caregiver for her love and support for the past six months. There will be a graveside service at 11 a.m. on Wednesday,January 5 at the Stewartstown Cemetery.

Ruth Shaw Kulpon passed away on December 28th at York Hospital, surrounded by her loving family. She was the wife of the late John Xavier Kulpon to whom she was married for 35 years. Ruth was born on July 30, 1921 in Hopewell Township, York... View Obituary & Service Information

The family of Ruth Shaw Kulpon created this Life Tributes page to make it easy to share your memories.

Send flowers to the Kulpon family.