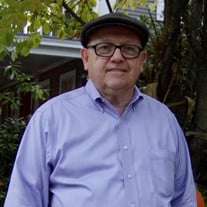 Thomas (Tom) J. Healy, 77, passed away Saturday, August 1, 2020. He was the beloved husband of Elizabeth (Betty) A. Healy for 52 years until her passing 2 years ago. Tom was born in Queens, NY to the late James and Rose (King) Healy. Tom retired from the Nassau County Health Department after 30 years as an environmental chemist. He then started his own IT consulting business for several years until his retirement in 2015. Tom was an active volunteer in the New Freedom community. He was a member of the St. John the Baptist Catholic School Board and a frequent visitor to the school. He helped with the budget and ran fundraising events, but his greatest love was working with the students. He led sing-alongs, co-led a science club, tutored students, and assisted in the computer lab. Tom was also an active volunteer with Friends of the Southern York County Library and the New Freedom Heritage Society. Tom was a generous loving husband, father, and papa. He was passionate about science and music. A self-taught musician, he could easily pick out any song on the guitar. Tom was always on the move; when he was not walking the rail trail, you could find him dancing at a church function. He made a friend of almost everybody he met. He cared deeply for his family, neighbors, and his church family. Tom will be deeply missed by all who knew him. Tom is survived by his three children, Anne T. Jones, and her husband Larry, of Towson Md., Kerry E. Healy of Towson, and John K. Healy, and his wife Diane of Acton, Mass; 3 grandchildren, Luke, Liam, and Landon Jones; and a brother James A. Healy and his wife Lynne of Clark Summit, Pa. On Saturday August, 15, a memorial mass will begin at 10 am at St. John the Baptist Roman Catholic Church, 215 N. Constitution Ave, New Freedom, PA 17349. The Rev. Robert A. Yohe, Jr. will officiate and interment will follow mass in the adjoining church cemetery. Guests are encouraged to wear masks and observe social distancing during the gatherings. In lieu of flowers, donations may be sent to St. John the Baptist Catholic School at the church address listed above in memory of Thomas Healy.

Thomas (Tom) J. Healy, 77, passed away Saturday, August 1, 2020. He was the beloved husband of Elizabeth (Betty) A. Healy for 52 years until her passing 2 years ago. Tom was born in Queens, NY to the late James and Rose (King) Healy. Tom retired... View Obituary & Service Information

The family of Thomas John Healy created this Life Tributes page to make it easy to share your memories.

Send flowers to the Healy family.