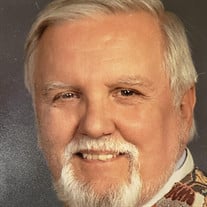 Rev. Wayne H. Upton, (Baltimore, MD), February 26, 1941, beloved son of the late Clarence Upton (Baltimore MD) and Miriam Palmer (Speake)(Pikesville, MD), peacefully passed away surrounded by his three daughters on January 25, 2021 at York Hospital, York PA, from complications after a bad fall on January 2, 2021. Wayne was the loving father of Vicky and husband David Chinery (Stewartstown PA), Tammy and husband Scott Leatherman (Stewartstown PA) and Michelle Upton (Dundalk, MD). He leaves behind 5 grandchildren, Travis Chinery, Gregory Chinery, Steven Walker, Olivia Leatherman, and Heather Ed Dahmouni (Chinery) and 1 great grandson, Adam Ed Dahmouni. As well as, his brother, Rev. Dennis Upton and several cousins, nieces, and nephews. He is preceded in death by his beloved wife of 55 years, Helga Heidi Upton (Bramakamp) (Stewartstown PA), and grandson James Roland Leatherman (Stewartstown PA). Wayne was born in Baltimore Maryland where he grew up in Brooklyn Park and graduated from City College High School. After graduation, Wayne enlisted into the Marines. Upon receiving an honorable discharge from the military, Wayne married Heidi in 1965. Wayne settled into married life and worked at US Gypsum for several years before deciding he wanted to be like his Grandfather, Rev. George W. Speake, and become a minister. Wayne earned his bachelor’s degree at Shepherd College in Shepherdstown, W. VA, and a Master of Divinity from Wesley Theological Seminary in Washington DC. Wayne became an ordained minister in 1976. Wayne ministered to many at several churches during his 39 years as a faithful servant with the Baltimore Washington Area Conference. He served as pastor at Keedysville UMC, Keedysville, MD 1968-1973, Idlewylde UMC, Towson MD 1973-1977, Long Green Charge (Wilson UMC & Union UMC), Long Green MD, 1977-1984, Forest Hill Parish (William Watters Memorial UMC & Forest Hill UMC), 1984-1994, Jarrettsville MD, Galesville UMC, Galesville MD, 1994-2000, Chase Ebenezer UMC Chase MD, 2000-2006. Wayne retired December 2006 and lived with Heidi in Stewartstown, PA. In addition to being a minister, Wayne also taught classes at Dundalk Community College and drove an ambulance for private ambulance company. Wayne was also a Mason and was a member of the Glen Burnie Lodge #13. Wayne had many hobbies which always involved working with people. He enjoyed volunteering as a fire fighter with Long Green Vol. Fire Company in Long Green MD and as an EMT with Jacksonville Vol. Fire Company in Jacksonville, MD. After he retired, because he had a love for reading, Wayne enjoyed working as a volunteer at the Mason Dixon Library in Stewartstown PA. Wayne also loved to sail with Heidi and his daughters and the family spent several summer vacations as Sailing Camp Counselors at West River Camp in West River MD which was part of the Baltimore Washington Conference. Wayne was a sports fan and enjoyed watching his favorite teams the Baltimore Orioles and Baltimore Colts at Memorial Stadium when he was growing up. However, he also enjoyed watching the Baltimore Ravens on TV and going to those games. Wayne also loved watching NASCAR races. Wayne’s love of sports wasn’t limited to professional teams, he enjoyed watching his own daughters play sports and cheered them on with pride. Wayne was definitely a family man and enjoyed spending time with his family, especially his grandchildren. “Pop Pop’s” stories, jokes and all-around fun spirit delighted his grandchildren. Wayne also enjoyed spending time visiting his grand dogs and cats, they have a special place in the family too. He will always have a very special place in each of his daughter’s and grandchildren’s hearts. Many of his daughter’s friends thought the world of Wayne and loved him like a father too. Wayne will be remembered as a kind-hearted, loving, and often funny man who left a lasting impression on so many people throughout his life. He formed many relationships during his time as a minister through sadness and joy and will be greatly missed by all that knew him. In lieu of flowers, please consider a donation in Wayne’s name to one of his favorite places: Mason Dixon Public Library 250 Bailey Drive Stewartstown, PA 17363 A Celebration of Life will be held in the future and information for the service will be shared on Hartenstein Funeral and Cremation Care Inc., website.

The family of Rev. Wayne H. Upton created this Life Tributes page to make it easy to share your memories.

Send flowers to the Upton family.