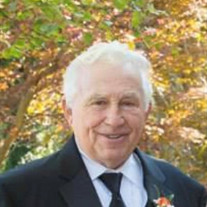 James (Jim) Michael Norton passed away Sunday, September 20, 2020 at York Hospital from injuries sustained in a vehicular accident. He was the loving husband of Suzanne (Thompson) Norton and doting father of Lindsay (Norton) Campbell. He was born February 3, 1944 in Baltimore, MD to the late George Henry Norton and Catherine (Lacey) Norton. Friends and Family are invited to the Graveside services which will be conducted at the New Freedom Cemetery Saturday, September 26 at 11:00 AM. In his early days, Jim farmed for various farmers and worked at the New Freedom Canning House before graduating in 1963 from Hereford High School; he then enlisted in the army where he became a paratrooper in the Special Forces during the Vietnam War. He was honorably discharged then began working in several industries: Black and Decker and Hershey Foods until beginning his own business in agri-business. He supplied mulch as well as other commodities and also spread lime. Jim built many friendships from all these experiences. He enjoyed going to local sales, IH exhibitions, tractor pulls, and family reunions. He also traveled with his wife and daughter on numerous vacations to several national parks and many states. Jim was one of the kindest people one could ever meet, and he thrived on helping others in any way he knew how. Many can attest to his generosity of lending them tools, giving them parts or equipment, sharing advice, and looking for something online or in the Lancaster Farmer for them. He found the most happiness in teaching his daughter how to be independent and sharing his knowledge with her including the joys of driving a manual vehicle. He was most proud of all her accomplishments. Besides his wife and daughter, Jim is survived by his siblings and their spouses: William & Norma Norton, George Robert & Connie Norton, Mary & John McGinnis, Theodore & Sharon Norton, and sister-in-law, Donna Norton. Jim is also survived by a host of nieces and nephews. He was preceded in death by his brothers Donald and Thomas Norton. In lieu of flowers, please consider donating to a charity of your choice. The family would like to express their sincere gratitude to the quick response to the police, Glen Rock and New Freedom fire companies and the Rose medic unit as well as the excellent care Jim received from the doctors and nurses in the trauma ICU at York Hospital.

James (Jim) Michael Norton passed away Sunday, September 20, 2020 at York Hospital from injuries sustained in a vehicular accident. He was the loving husband of Suzanne (Thompson) Norton and doting father of Lindsay (Norton) Campbell. He was... View Obituary & Service Information

The family of James Michael Norton created this Life Tributes page to make it easy to share your memories.

Send flowers to the Norton family.