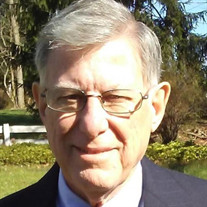 William P. Brooks, “Bill”, went home to be with the Lord on March 26, 2022 at the age of 79. He was born in Ridley Park, Pennsylvania through the marriage of Howard R. and Jesse K. Brooks. He married Carol Sue Clouden in 1965 and they celebrated their 56th wedding anniversary last year. Their two sons, William Paul Brooks and Christian Andrew Brooks were born in 1972 and 1974. He has several grandchildren, including Everest Zion Brooks, along with adopted children/grandchildren Celeste Britos-Bray, Taniahya Watkins, and Tyleal Fields. Bill dedicated his life to the Lord at an early age and was a spiritual mentor to many families and men throughout this life. His parents operated a Sunday school in Red Point, Maryland, when he was a boy and many people accepted Christ through this ministry who otherwise may not have heard the gospel. Their family attended The Philadelphia Gospel Temple, an evangelical church, where eventually he would go on to meet his wife Sue, where both of their fathers served in church leadership roles, and Bill and Sue would get married by Pastor John Poole in a big church wedding. Bill graduated Ridley Park High School in 1960 and Pennsylvania Military College (which is now called Widener University) in 1964 with a B.S. in Accounting, and then took Master’s courses and CPA training at Temple University. Bill was recruited out of college by Atlantic City Electric Company. He then went on to work for a (then) Big 10 accounting firm Ernst & Ernst (now one of the remaining Big 4 Accounting Firms “Ernst & Young”). While working for Whiting Patterson, he was transferred to Commercial Envelope and moved the family to Maryland. He gained unique experience with Financial and Accounting Information and Data systems, which proved to be valued by his employers as he progressed through his career. He spent most of his time between two companies: as Treasurer at Tongue, Brooks & Co. and Vice President at Transamerica Insurance Finance. He has fond memories of working for Transamerica, as they had executive leadership meetings at exotic destinations all over the world, and he traveled regularly to manage many of the national offices. Later in life, he worked as a consultant for Alex Brown Investment Bank, Deutsche Bank, and Provident Bank. After moving to the Severna Park Maryland area in 1974, the family was members of Trinity Bible Church, Mana Fellowship Church, and Pasadena Community Gospel Church. In 1998, Bill and Sue left Maryland to pursue their lifelong dream of owning a farm. “Glenmore Farm” was a working farm they operated in Sothern York County Pennsylvania for nearly 20 years with goats, sheep, chickens, guinea fowl, a donkey named “Jack”, as well as numerous cats and dogs over the years. They attended Bethlehem Steltz Church, where Bill became ordained as an Elder, and then joined the family of Grace Church Shrewsbury, where Bill was a member of the Church Council for six years. They were very active in other church ministries, such as the Gifts of Grace food pantry, children’s nursery, teen “BIG” Program, as well as ministering to other families in the church and being a mentor and pillar of support to people in need of hearing about Jesus’ grace and the good news of salvation. Bill valued his friendship with Pastor Jeffrey Slemp of Grace Church, and Bill often remarked how rare it was in a lifetime to find someone whose theology was so similar to his own. In 2018, Bill was diagnosed with Parkinson’s disease. The times during the pandemic were challenging for the family, and Sue became his primary caregiver, all while having to quarantine due to COVID-19. Bill did not suffer much during his last few years with Parkinson’s, but he was not happy with his “failing” body and having to be a burden on Sue. He passed away during his sleep on the morning of March 26, 2022. We’re so happy to know that he’s rejoicing in heaven, with the new body that God has provided for him! Even during his final days, Sue remarked how gentle he was, and he never lost his appetite or forgot who his loved ones were. He loved his family and provided for them financially and spiritually for many years! Bill is survived by his loving wife Sue. They have known each other for 60 years. Bill’s older brother Howard R. “Rod” Brooks, Jr. and wife Ruthann live in Avondale, Pennsylvania. Bill Jr. lives in Towson, Maryland and Chris lives in Felton, Pennsylvania. Everest lives with Sue in Glen Rock, PA, where he has helped his grandparents manage the farm for the past two years. The family acknowledges many lifelong friendships that were made over the years including the Bosley School Road neighbors, the Ash Circle group, friends from Trinity Bible Church in Severna Park, Bethlehem Steltz Church, Grace Church Shrewsbury, and the many lives Bill touched during his working career spanning six decades. The family is honoring Bill’s wishes to be cremated. The ashes will be buried at the family’s private cemetery plot located at Bethlehem Steltz Church Cemetery. A Memorial Service and Celebration of Life will be held at Grace Church Shrewsbury, 473 Plank Rd, New Freedom, PA 17349, on Saturday, April 23, 2022. Visitation will begin at 11:30 a.m., service at 12:00 p.m., followed by a Luncheon. Donations can be made to Grace Church Shrewsbury (https://graceshrewsbury.churchcenter.com/giving) or Penn North Recovery Center (http://www.penn-north.com/donate/) in lieu of flowers. HartensteinCares.com.

William P. Brooks, “Bill”, went home to be with the Lord on March...

Send flowers to the Brooks family.