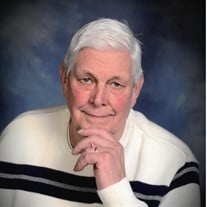 Gary L. Shultz, 83, went home to be with his Lord and Savior on March 14, 2021. There will be a viewing for Gary on Wednesday, March 17th, from 6:00pm to 8:00pm at Glen Rock Church of Christ; 3899 Sticks Rd., Glen Rock, PA 17327. A service of celebration will be on Thursday, March 18th, at 10:00 am at the church; Mr. Allen McKinney will officiate. The interment will follow in Susquehanna Memorial Gardens, York. Military rites will be offered by the York County Veterans Honor Guard. Hartenstein Funeral and Cremation Care, Inc., New Freedom is assisting with the services. All attendees will be required to wear a face mask and practice social distancing. Gary was born July 7, 1937, a son of the late Leroy V. and Ruby L. (Flohr) Shultz. He was the loving husband of the late Ruth Elaine Shultz, to whom he was married for more than 59 years. He was the owner of Gary L. Shultz General Contractor since 1975 and was a member of Glen Rock Church of Christ since 1967. He served on the board of directors at Delaware Valley Christian Camp and volunteered as a camp staff member for decades. He served as a deacon at Glen Rock Church of Christ and as Youth Leader. Gary, along with his wife, Ruth, led 8 mission trips to Mexico building churches and yearly mountain retreats at the family cabin in the mountains of PA. Gary will be remembered by his five children: three sons, Timothy Shultz and his wife Lori; David Shultz and his wife Karlisa; and Eric Shultz and his wife, Milissa; and two daughters, Melody Shue and her husband Timothy; and Courtney Bollman and her husband Gene; 12 grandchildren: Caleb, Breanne, Karlyn, Kayla, Kagen, Isaac, Kai, Kyra, Adam, Jacob, Aiyanna and Desta; and 6 great grandchildren: Kaden, Jael, Theo, Alem, Aidah, and Tenley; three sisters Nancy Newbould, Virginia Shultz, and Betty Bankes; many nieces and nephews. He was also preceded in death by his two siblings Stephen Shultz and Barbara Shea. In lieu of flowers, contributions may be made in Gary’s memory to Delaware Valley Christian Camp, 33 Camp Road, Douglassville, PA 19518.

The family of Gary L. Shultz created this Life Tributes page to make it easy to share your memories.

Send flowers to the Shultz family.