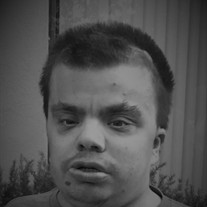 Eric R. Hoeck, 30, of Stewartstown, PA passed away September 3, 2019 at his residence. He was the son of the late Ronald and Joann (Marano) Hoeck. Eric was born in New Freedom in 1989. He very much enjoyed his teachers and friends at Penn-Mar, and was always excited to go to school. He came to love the Residential Assistants that cared for him over the past two years. Eric was fascinated with penguins, windsocks, and had a very large collection of nutcracker statues. His smile and quirky humor always brought smiles to those around him. Eric had a love of music and could sing a song after hearing it just once—he sang often on his way to school. He looked forward to Grandma’s Sunday dinners for many years. Eric enjoyed watching TV shows and his favorite DVD’s starting with Blue’s Clues and Sesame Street when he was young to I Love Lucy, Golden Girls and even Sponge Bob! He loved chocolate cake and milkshakes—his favorite haunts were Chick-fil-A, Arby’s, Wendy’s, and Bob Evans. Going to the mall was a favorite activity, and as a special treat, he liked to watch the chefs at Hibachi steakhouses put on their show. He will be missed by his devoted and caring family, as well as his friends, caregivers, classmates, and instructors. Eric is survived by his sister Rachel Hoeck; his aunts, Carol Petras and her husband Stephen, Fran Messina, Teresa Connelly and her husband Kevin, and Marie Davidson; his uncle, Patrick Fahey; his grandmother, Lucy Marano; and many loving cousins. Services are private at this time. The family would like to specifically extend their appreciation to Penn-Mar, their staff, and affiliates, and all the services and care that they were able to provide to/for Eric over the years. In addition to their thanks, the family would ask that, in lieu of flowers, donations may be made in Eric Hoeck’s memory to Penn-Mar Human Services, 310 Old Freeland Rd, Freeland, MD 21053.

Eric R. Hoeck, 30, of Stewartstown, PA passed away September 3, 2019 at his residence. He was the son of the late Ronald and Joann (Marano) Hoeck. Eric was born in New Freedom in 1989. He very much enjoyed his teachers and friends at Penn-Mar,... View Obituary & Service Information

The family of Eric Ryan Hoeck created this Life Tributes page to make it easy to share your memories.

Send flowers to the Hoeck family.