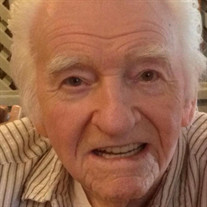 John Joseph “JJ” Colbert, 91, of Shrewsbury, PA, passed away peacefully on September 13, 2020. He was born on January 30, 1929, to Jeremiah and Alice (Cooney) Colbert in Washington, D.C., where he lived for 32 years. He graduated from St. Anthony’s Catholic School in 1947, earned his bachelor’s degree in business from Georgetown University and was commissioned as an officer in the United States Marine Corps in 1952. After an honorable discharge from the USMC he settled down and married Mary Elizabeth “Betty” Schilke, on February 23, 1957. They moved to the Maryland suburbs in 1961 and raised their family in Lanham, where they were members of St. Matthias Catholic Church. John spent many years working in the private sector until he found his home with the Office of the Mayor, Washington, D.C. until he retired in 1989. A few years later, they moved to Ocean Pines, Berlin, MD where John enjoyed golfing and playing cards with some of his closest friends from St. Anthony’s. In 2011, they moved to Shrewsbury, PA, to be near family. John was a gifted baseball player, Washington Redskins season ticket holder, a private airplane pilot, a private detective and co-founder of Colbert Detective Agency, and a security and logistics consultant for the NAACP. John was predeceased by his wife, Betty, and is survived by his 3 daughters and their husbands, Julie and John Nazaka, Laura and Jeffrey Donahue, and Michele and Vernon Kelly; 8 grandchildren: Casey Kelly, Colin Kelly, John (Christine) Nazaka, Tony (Jodie) Nazaka, Will Donahue, Tim (Katie) Donahue, Jeremy (Whitney) Donahue, and Andrew (Ellen) Donahue; 9 great-grandchildren: Maggie, Cleo, Brayden, Lana, Jude, Jackson, Finn, Summer and Briar; along with beloved nieces, nephews, and cousins. Services will be held on Saturday, September 19, 2020 at St. Anthony of Padua Catholic Church, 1029 Monroe Street, NE, Washington, DC 20017. Viewing will be 10:00 a.m. to 10:45 a.m. followed by the funeral mass at 11:00 a.m. Burial will be private. In lieu of flowers, memorial contributions in John’s name can be made to St. Anthony of Padua Catholic School.

The family of John Joseph Colbert created this Life Tributes page to make it easy to share your memories.

Send flowers to the Colbert family.