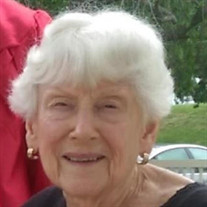 Mary Elizabeth “Betty” Colbert, 93, of Shrewsbury, PA, passed away peacefully on April 7, 2020. She was born on February 17, 1927, to Ernest H. and Mary (Lovelace) Schilke in Washington, D.C., where she lived for more than 30 years. On February 23, 1957, she married John Joseph Colbert, also a D.C. native, at St. Anthony’s Catholic Church. This year, they celebrated their 63rd anniversary. In 1961, they moved to the Maryland suburbs and raised their family in Lanham, where they were members of St. Matthias Catholic Church. Betty worked at C&P Telephone Company as a financial clerk, retiring in 1987. A few years later, they moved to Ocean Pines, Berlin, MD. She loved going to the beach, playing cards, and hosting family and friends. In 2011, they moved to Shrewsbury, PA, to be near family and quickly found their new “parish home” at St. John the Baptist Catholic Church. Betty will always be remembered as an avid Washington Redskins fan and was a season ticket holder for more than 30 years. She also loved to eat. Those who knew her often wondered how such a small woman could always clear her plate -- and still order dessert (although nothing ever compared to her homemade Red Velvet Cake). Betty is survived by her husband, John; her 3 daughters and their husbands, Julie and John Nazaka, Laura and Jeffrey Donahue, and Michele and Vernon Kelly; 8 grandchildren: Casey Kelly, Colin Kelly, John (Christine) Nazaka, Tony (Jodie) Nazaka, Will Donahue, Tim (Katie) Donahue, Jeremy (Whitney) Donahue, and Andrew (Ellen) Donahue; 8 great-grandchildren: Maggie, Cleo, Brayden, Lana, Jude, Jackson, Finn and Summer; along with a host of beloved cousins, nieces, nephews, and friends. Betty was preceded in death by her parents and her two sisters, Eileen Devaney Colbert and Joyce Allen. Special thanks to the nurses, aides, and all staff members at Zimmerman Place for their devotion to the health and happiness of Betty and the other residents. A private viewing and graveside service will be held on Monday, April 13. Memorial contributions can be made in Betty’s name to St. John the Baptist Catholic Church, 315 N. Constitution Ave, New Freedom, PA 17349.

The family of Mary Elizabeth "Betty" Colbert created this Life Tributes page to make it easy to share your memories.

Send flowers to the Colbert family.