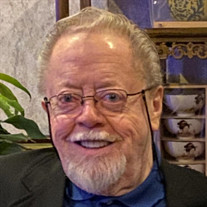 Richard M. Rafferty passed away at home on Thursday, September 2, 2021. He was born on October 5, 1941 in New York City to the late James and Mary (Staunton) Rafferty. Richard was raised in the The Bronx, NY with his six beloved siblings: James Rafferty, John Patrick “Jack” Rafferty, Thomas Rafferty, George Rafferty, Martha Jane Rafferty and Martin Rafferty. Richard married Rosalie J. (House) Rafferty on May 31, 1975 and shared a 46 year union. He is survived by his wife, daughter Susan Shultis and her partner Matthew Inkster, his Son Michael Rafferty and fiancé, Johanna Garrison, his sister Martha Jane Rafferty, his brother Martin Rafferty , Sister in-laws, Judy, Myra, Janet and Betsy Rafferty, as well as many nieces, nephews and Godchildren that he dearly loved. In his younger years, Richard honored his country by serving in the US Army National Guard and the 69th Irish Brigade. His ongoing love of country was depicted by his collection of American Flags that he meticulously hung and cared for throughout his life. He was a Bartender in many famous Hotspots in NYC where he acquired a love for music, a good party and good company. Richard and Rosalie spent 25 years’ operating a small business in Teaneck, NJ, where they raised their family and made lasting memories and many friends. In Retirement, Richard became a cancer survivor, a self-appointed re-purposer, a shoulder to lean on and a steady presence in the home. He unconditionally loved his grandchildren, Starr Faster, Corinne Shultis, Dorian Faster, Mia Shultis, Grace Garrison, and Emily Rafferty. Often referred to as “Pop”, Richard provided a grandfatherly presence to special friends that he viewed as family. Often crafting nicknames, jokes and stories, he held a special sentiment for Maddie Ketterer, Colin Allen, Alison & Adriana Werdin, Olivia & Braylon Kelly-Taylor, Camron Anderson, Aidan Inkster, Madison Inkster, Brendon Inkster and Grace Salafia. Samuel Alls, Cole Sugg, and Andrew Fuller all held a special place in his heart. These memories will last in our hearts forever. A viewing will be held on Thursday September 9th, from 2:00-3:00 PM AND 6:00-8:00 PM. A funeral service officiated by Deacon Fred Horn will be held at 3:00 pm and Military Honors will be presented at 7:00pm. Interment is private. All Arrangements are being handled by Hartenstein Funeral & Cremation Care, Inc. 24 N. Second St., New Freedom, PA 17349. www.hartensteincares.com

Richard M. Rafferty passed away at home on Thursday, September 2, 2021. He was born on October 5, 1941 in New York City to the late James and Mary (Staunton) Rafferty. Richard was raised in the The Bronx, NY with his six beloved siblings: James... View Obituary & Service Information

The family of Richard Michael Rafferty created this Life Tributes page to make it easy to share your memories.

Richard M. Rafferty passed away at home on Thursday, September...

Send flowers to the Rafferty family.