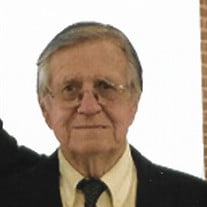 Doug Lewis (Carroll D. Lewis) passed away peacefully in his home near Glen Rock on Tuesday morning, November 5th, 2019. Doug was born in February 1927 in the Hampden neighborhood in Baltimore, MD. Doug was the first child of Carroll E. and Dorothy Lewis, and grew up in Hampden with his two younger brothers, Bo and Gene. Though Doug grew up during the Great Depression, he had a wonderful childhood, anchored by his happy and outgoing mother, and his hard-working father. Doug participated in many sports, and grew to love them. As a child, Doug became a gifted guitar player, and would play and sing with his mother and brothers often while growing up, and also in later years. He later played his guitar and sang to his children and grandchildren, and he knew many of the old folk tunes that all wanted to hear over and over again. Doug was a very happy and upbeat person, always ready with a joke or a light-hearted quip, to bring a smile to the faces of those around him. He had the rare gift of remaining happy, even when life presented significant challenges, as it does to all. Doug also enjoyed a spirited political discussion, participated in local politics, and was even good-natured about that. At the age of 17, Doug volunteered for and served in the United States Navy in the Pacific Theater. He was stationed on a U.S. Navy LST in the Pacific. This was a ship that supported amphibious landing operations by carrying tanks, vehicles, cargo, and for landing troops directly onto shores with no docks or piers. After being honorably discharged in 1946, Doug met and married Gerri (Geraldine) Mathias. Doug and Gerri would be ultimately be married for 67 years, having three children. Doug was a dedicated and reliable husband and father. Doug came to work for BGE as a Senior Electrical Technician. While at BGE, Doug would drive many hours from distant work-sites to get back home to support his family or even his animals, no matter the distance or time required. Doug had very strong work ethic, and really enjoyed his 42 years at BGE, retiring at age 62 in 1989, to the farm life. He sometimes commented that he enjoyed his work so much that he wished he had more than 42 years there. Doug eagerly attended BGE events for the next 40 years, always happy to see his work friends. He and Gerri resided in the Medfield neighborhood of Baltimore to be close to family that needed help until 1969, when they moved to the northern-most part of Maryland. Ultimately, they found their dream-home in 1974, a 40-acre farm located just outside of Glen Rock, Pennsylvania. Being animal enthusiasts, they had more than ten horses over the years, many dogs, cats, geese, and other pets as well. They both enjoyed spending their free time working with the animals, and upgrading the farm in various ways. They also acquired two miniature donkeys that they enjoyed for more than 25 years, of which they were particularly fond. Gerri passed away in 2015, also at home, like Doug Doug remained jovial and good-hearted until the very end of his time, with a clear mind. He is survived by his three children, Terrie Wood, Collette Anderson, and Randall Lewis. He has six grandchildren and seven great-grandchildren. Doug and Gerri were especially good to their grandchildren in their golden years. In lieu of flowers, please send donations to the Little Longears Miniature Donkey Rescue in Westminster, MD, where Doug's two miniature donkeys, Mutt and Jeff, are living in sanctuary. The website is https://www.littlelongears.org/sponsor-a-donkey/ and his two donkeys are listed as Matt and Jeff (Matt is really Mutt).

Doug Lewis (Carroll D. Lewis) passed away peacefully in his home near Glen Rock on Tuesday morning, November 5th, 2019. Doug was born in February 1927 in the Hampden neighborhood in Baltimore, MD. Doug was the first child of Carroll E. and... View Obituary & Service Information

The family of Carroll Lewis created this Life Tributes page to make it easy to share your memories.

Send flowers to the Lewis family.