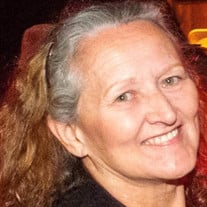 Kay Hughes, 71, of Glen Rock, passed away on Monday, November 1, 2021, at WellSpan York Hospital. Born March 16, 1950, in Darlington, PA, she was the daughter of the late John H. Dunham, Jr., and Pearl (McCowin) Dunham. The wife of Edward L. Hughes, they have owned the Whistle Stop Bike Shop in New Freedom since 1993. Kay graduated in 1968 from Northwestern High School in Darlington and attended Geneva College in Beaver Falls and the Peabody Institute in Baltimore, where she studied opera. She later finished apprentice training at the top of her class and became one of the first female master electricians in the State of Maryland. She retired from Baltimore County Inspections and Permits after nearly 20 years. In addition to her husband, she is survived by her son, Jason Knauer, and his wife, Cheryl, and three grandchildren, Elijah, Owen, and Olivia. Also survived by her stepson, Michael Hughes, and his wife, Stefanie; stepdaughter, Shawn Furr, and her husband, Martin; step-grandchildren, Collin, Alyssa, and Cayden Hughes, Christopher Furr, and Shannon King; and step-great-grandchildren, Zoe, Sophie, and Jake King. Additionally, she leaves two brothers, Paul and Dennis Dunham, and three sisters, Ginny Fawcett, Grace Ferguson, and Betty Taylor. She was preceded in death by her brother, John Henry “Henny” Dunham, III. Kay served as the longtime secretary for the Seitzland Rifle Club in New Freedom and was on the board for New Freedom Heritage, where she planned the community outdoor movie nights. She was a loving mother and doting grandmother who enjoyed baking and making homemade candies, especially with the help of her grandchildren. She will be missed dearly by her family. A Celebration of Life is planned for Sunday, Nov. 21, at 1 p.m. at the New Freedom Community Center with all welcome to participate in a bike parade to follow. A “Kay Hughes Movie Night Fund” has been set up at Peoples Bank and contributions can be sent to New Freedom Heritage, Inc., P.O. Box 366, New Freedom, PA 17349, with checks made out to New Freedom Heritage, Inc., and “Kay Hughes Movie Night Fund” on the memo line. Hartenstein Funeral & Cremation Care, Inc., 24 N. Second Street, New Freedom, PA 17349 is assisting the family and condolences can be shared at www.HartensteinCares.com.

Kay Hughes, 71, of Glen Rock, passed away on Monday, November 1, 2021, at WellSpan York Hospital. Born March 16, 1950, in Darlington, PA, she was the daughter of the late John H. Dunham, Jr., and Pearl (McCowin) Dunham. The wife of Edward L.... View Obituary & Service Information

Kay Hughes, 71, of Glen Rock, passed away on Monday, November...

Send flowers to the Hughes family.