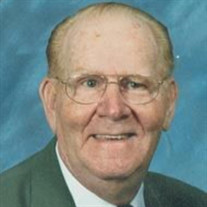 Paul Joseph Kemper, 85, of Glen Rock, PA went to be with the Lord on April 20, 2022. Paul was born in York, PA to George and Orpha Orndorff Kemper, on September 27, 1936. He graduated from Susquehannock High school in 1954, and married Peggy Hamilton on January 1, 1955. Paul had an egg delivery business, then worked at Main Tool in New Freedom before becoming a supervisor of the tool and die department at Black and Decker in Hampstead, MD. He had the gift of being able to build and fix virtually anything. Paul was an avid outdoorsman and shared his passion for hunting and fishing with his sons, nephews, and friends. He was a member of New Freedom Baptist Church, and a co-founder and member of Shangri-La Hunting Camp in Potter County. Paul loved the Lord, his family, playing Rook, riding his scooter, looking for deer, and trips to the cabin with family and friends. Paul will be greatly missed by his loving wife of 67 years, Peggy; his three sons and their spouses, Ronald and Sandy, Jerry and Sue, and Barry and Stacey; his daughter-in-law Debbie; his 10 grandchildren and 8 great-grandchildren; and his sister, Tottie Evans and her husband, Georg. Preceding Paul in death are his son Paul Jr.; his siblings Phillip, Mable Shearer, Lilly Martin, and Marg Sheffer; and his parents George and Orpha. A viewing will be held on Monday, April 25th, from 6:00 pm- 8:00 pm and Tuesday, April 26th, from 10:00 am-11:00 am at Hartenstein Funeral and Cremation Cares, Inc., 24 N. Second Street, New Freedom, PA 17349. A funeral service will begin at 11:00 am on Tuesday at the Funeral Home, with interment immediately following in New Freedom Cemetery, Campbell Rd., New Freedom, PA 17349. In lieu of flowers, memorial donations may be made in Paul’s memory to the New Freedom Baptist Church, 851 Campbell Rd., New Freedom, PA 17349 or to SpiriTrust Lutheran, 800 Bollinger Drive, Shrewsbury, PA 17361. The family of Paul Kemper would like to thank the staff of SpiriTrust Lutheran in Shrewsbury for their care. A special thank you to Pastor Mike Hopkins for his spiritual support and care. www.HartensteinCares.com

Paul Joseph Kemper, 85, of Glen Rock, PA went to be with the Lord on April 20, 2022. Paul was born in York, PA to George and Orpha Orndorff Kemper, on September 27, 1936. He graduated from Susquehannock High school in 1954, and married Peggy... View Obituary & Service Information

The family of Paul J. Kemper created this Life Tributes page to make it easy to share your memories.

Send flowers to the Kemper family.