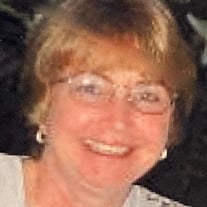 On Friday, April 30th Terry Lynn Roth ( Miller ), age 72, passed due to complications of ALS. Terry was at home with her husband by her side. Those of us left behind bear monumental sadness and heavy hearts, but we rejoice in Terry’s release from suffering and her place in God’s heavenly kingdom. ALS may have taken away most of her physical abilities, but it could never shake her inner strength and faith. Terry was born in Baltimore, Maryland on August 20, 1948 to Henry H. Miller and E. Jeune Miller ( Brauer ). She was a 1966 graduate of Towson High School in Towson, Maryland and Salisbury State University in Salisbury, Maryland in 1970. At Salisbury, she played on the school’s field hockey team for 4 years and was the school’s first dual major in both elementary education and elementary physical education. Following graduation, Terry would go on to teach 4th grade for 4 years at Sparks Elementary School in Sparks, Maryland. Terry married Edward Roth on April 10, 1971 and they were able to celebrate their 50th wedding anniversary several weeks ago. Terry and Ed moved to Southern York County in 1977 following Ed’s military service. Terry dedicated herself to raising their children until the youngest was in high school and then briefly was a substitute teacher and volunteer field hockey assistant coach in the Southern York County School District. She then spent many years working part time in Ed’s dental practice. She was also very active in ministry at Christ Lutheran Church in Shrewsbury and later at Trinity United Methodist in New Freedom, where she is a member. Terry also served on the board of the Southern YMCA for a period of time. Following the birth of several grandchildren and realizing the special love grandchildren give, Terry trademarked TAEG Designs. TAEG stands for Terry and Ed’s grandchildren. Through TAEG, Terry designed and sold heart necklaces where when the light passes through the pendant the shadow spells love. Terry loved the outdoors and spent many hours birding, cycling and hiking. She enjoyed playing in a card club that has been together for 40 years and joining fellow wine lovers in a local wine club. Terry also was an avid reader and facilitated Trinity’s book club. Especially joyous times for Terry were the many family vacations where all the children, their spouses and grandchildren would gather for a week of fun together. Terry and Ed have three wonderful daughters, Leigh DiFerdinando of Downingtown, Pennsylvania , Michelle Hartman of York, Pennsylvania and Jill Dawson of Boulder, Colorado. Terry and Ed are very proud of the fine women they have become along with their daughter’s husbands, Joe DiFerdinando, Eric Hartman and Ryan Dawson. Terry and Ed have 8 grandchildren. Sophia DiFerdinando, Max DiFerdinando, Dominic DiFerdinando, Allison Hartman, Anna Hartman, Megan Hartman, Ben Dawson and Avery Dawson. They were a true joy to their MomMom. Besides being survived by her husband, daughters, sons-in- law and grandchildren, Terry is survived by a brother Charles Miller and his wife Penny of Plymouth, Massachusetts , a sister Rev Bonnie Moore of Nazareth, Pennsylvania, a sister Nancy Dobry and her husband Steve of Nottingham, Maryland and a sister-in-law, Janice Roth of Parkville, Maryland. Terry was predeceased by her parents, Henry and Jeune Miller, her in-laws, Raymond and Neva Roth and her brother-in-law Jason Roth. A visitation for family will be held at Trinity Methodist in New Freedom with a service to follow. Due to COVID protocols, the visitation and service must be limited to immediate family and a few very close friends. Following cremation Terry’s ashes will be interred at the New Freedom Cemetery. Terry would want you to hug your family, get outside to enjoy God’s creation and raise a glass of Cabernet or Chardonnay. Those all will make Terry’s spirit smile. In lieu of flowers please make a donation in Terry’s memory to the Philadelphia Chapter of the ALS society or go to moveforals.org and donate to ALS through the fundraising challenge Terry, her family and friends organized that is currently in progress.

On Friday, April 30th Terry Lynn Roth ( Miller ), age 72, passed due to complications of ALS. Terry was at home with her husband by her side. Those of us left behind bear monumental sadness and heavy hearts, but we rejoice in Terry&#8217;s... View Obituary & Service Information

The family of Terry Roth created this Life Tributes page to make it easy to share your memories.

Send flowers to the Roth family.